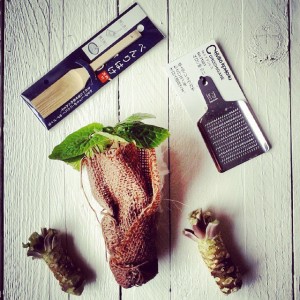 Wasabi from The Wasabi Company

In a world where the way we shop, cook and eat is changing a growing number of innovative farmers are looking at unusual crops which can be grown in our climate. The Wasabi Company, based in Dorset, is a fascinating example of this.

Wasabi has been grown and eaten in Japan for thousands of years but it has only really come to our attention in Britain as the popularity of sushi has grown. It’s a member of the Brassica family with a flavour similar to horseradish, although the two are not related. In fact, most people in Britain who think they have tried wasabi probably haven’t. Many of the ‘wasabi’ products for sale or those used in pre-prepared foods contain only a very tiny amount of wasabi and are actually made up of horseradish and mustard powder. I had never tasted wasabi, real or otherwise, in fact I’ve never even eaten horseradish, so when I was asked if I would like to try some from The Wasabi Company I thought, why not!

It’s the chunky rhizomes which the plant forms just above ground that are grated to make the wasabi paste. I’ll admit I was a little dubious. I had heard of its reputation to be quite potent and for someone who is a self-confessed chilli wimp I was a little trepidatious. Well, it turns out it’s not as hot as I thought it would be, which in my opinion is a good thing. I’ve never really understood why people love super hot chillies which overwhelm your taste buds and render the rest of a meal virtually tasteless. The heat of wasabi is much more akin to a mustard rather than a chilli and I really liked it.

Would it be actually be a useful product was my next question? I love to cook but I’m becoming a little weary of recipes which require a whole gamut of weird and wonderful ingredients. They are all generally  very tasty, but once opened they often have such a short shelf-life which means you need to eat the same ingredients every other night for a month to use them up, or gain an increasingly eclectic bunch of jars, bottles and tubs in the fridge which are never finished. I imagined it only working with sushi but it turns out it’s actually very versatile. We had it mixed into puréed peas with crème fraîche served with scallops which was delicious, but I was intrigued as to whether it could be used in more day-to-day food. I loved it added to mayonnaise which tasted fantastic with cray fish and it even worked in my humble egg mayo sandwiches. So rather than the rhizomes festering in the fridge they were actually a quick and easy way to add flavour. Apparently you can add it to mashed potato too.

Fresh wasabi needs to be finely grated into a paste to release the flavour (this is not the time to use the cheese grater). The Wasabi Company sell special wasabi graters, (although a microplane would be fine) and a little brush is used to remove the paste from the grater. The flavour lessens within 15 to 20 minutes so it’s best to prepare wasabi just before you want to eat it rather than in advance. It’ll look much paler in colour – a pale green – than any shop-bought wasabi which has colourings added to it.

As for growing my own. Well it’ll take some time to tell whether it’s a suitable plant for home-growing. It seems it can be a tricky plant to cultivate, particularly on a large-scale. In Japan it grows beside cool mountain streams where it is flushed with clear, nutrient-rich water, similar to watercress. This type of growing is known as sawa wasabi and is the most sought after. It’s taken several years of research and trials for The Wasabi Company to get the growing conditions right and as they have over 120 years of experience growing watercress they are certainly well-placed to make commercial cultivation a success. These aren’t conditions I can replicate at home, so I’ll have to make do with growing oka wasabi (soil-grown). It needs lots of shade, doesn’t like extremes in temperature and is hardy down to -5°C. The young wasabi plant came wrapped in hessian and was the size of a good-sized plug plant. Advice is to pot up into a 9cm pot initially so that it can establish a healthy root system. I’m in garden limbo at the moment so mine will have to live in a large pot for the foreseeable future but I’ll have to make sure it’s kept moist and given a regular feed.

An attractive plant in its own right with pretty heart-shaped leaves and delicate white flowers (apparently they’re scented) it could make an excellent addition to a forest garden where shade-loving crops are hard to find. Wasabi will grow to about 60cm tall and it’ll take a few years at least for the plant to form good-sized rhizomes which are ready to lift and eat, but the leaves and stems are also edible. Sounds like a fantastic crop for cooks and growers. Fingers crossed it’s happy growing in Wales.

Thank you to Sophie at Pam LLoyd PR.

For more information, recipes, how to buy the rhizomes and your own wasabi plants go to The Wasabi Company.