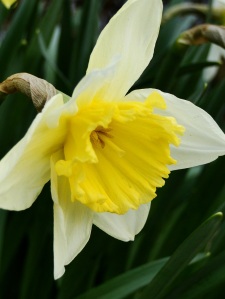 It’s the vernal equinox this week. Not that it has felt especially spring-like, thanks to a chilly blast of weather from Scandinavia. There was a dusting of snow on the North Pennines and an icy wind coming in off the North Sea this weekend, so I was glad of the winter woollies I’d packed for the trip to visit family in the north-east. And it hasn’t felt much warmer now I’m back at home. Despite this the garden is taking on the appearance of spring, and the birds are singing and foraging for nest material. It’s worth not being too thorough in your spring tidy of the garden as dried leaves, grasses and small twigs will come in handy for garden birds building their spring homes. I watched a blackbird this morning gathering leaves from my path and flying off with them, which is much more preferable than the decimation of a Stipa tenuissima plant by house sparrows a few years ago. They pulled out the bleached blonde grass and flew off with their bounty in their beaks. I consoled myself with the knowledge that they would have a softly-furnished nest.

As for scent in my garden. Well, it’s that cross-over period between seasons, so the winter-flowering honeysuckle, sarcococca and viburnums are still flowering and filling the air with scent. In fact, March is perhaps the best time of the year to appreciate their perfume as those first warm days of spring mean their fragrance carries much further.

Daffodils have now taken centre stage as the snowdrops fade. Most narcissi have a fragrance but some are stronger than others. Several years ago whilst on a break in Cornwall we came across a field of daffodils. I hadn’t seen such a sight before, with so many planted en masse. The sight of golden fields was spectacular, but it was the scent which was so surprising. I’d never really given any thought to how the daffodil fields would smell. The aroma was so strong it drifted across the road to the car. I’d wound down the window to get a better glimpse of the field but it was the perfume that took my breath away.

Picking a bunch of daffodils and bringing them indoors is the best way to appreciate their scent, particularly if it’s a cold spring. Most people are understandably reluctant to pick flowers from their garden, not wanting to denude it of any beauty. Devoting an area especially to spring bulbs for cutting is a real treat and worth doing if you can free up some space. Plant small rows of at least six varieties of daffodils – choose ones which flower at different times and you’ll have a good spread of blooms for picking. I didn’t plan for this last autumn because I wasn’t sure whether I’d be keeping the allotment and now I’m really missing having some daffs to pick for the house.

However there is a good show in the garden. ‘February Gold’ should really be renamed ‘March Gold’ as now is the month when it seems to reliably reach its peak. I tend to prefer the smaller flowering varieties such as ‘Jack Snipe’ and ‘Tête-à-Tête’ in a garden setting rather than the bigger, bolder flowers commonly planted in large drifts by councils. ‘Ice Follies’ however has made its way into the garden via the allotment cut flower patch. It’s very pretty with its ivory petals and pale lemon trumpet and has a fabulous perfume.

Scented narcissi are the ones which really pack a punch with their perfume and these are my true favourites. They tend to produce flowers on quite tall stems so maybe aren’t everyone’s cup of tea for the garden but if you’re after spring scent they are hard to beat. The first to open in the garden is ‘Grand Soleil d’Or’. 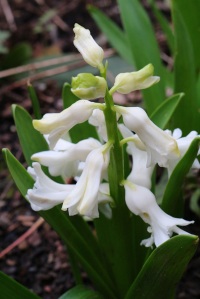 I have only ever grown hyacinths as forced bulbs for late winter/early spring flowers indoors. It’s taken me a while to learn to love their perfume. I found it too powerful when I was a child and used to avoid the room where my mum kept her hyacinth displays. As for outdoors, I’ve never really been convinced that the stubby form of hyacinths lends itself to the garden border. However last spring I shoved a few of the forced bulbs in the ground once they had finished flowering. Mainly this was because I was intrigued as to whether they would actually come back – it’s often suggested they won’t because of the special treatment they need for forcing. Well they have reappeared and I rather like the white flowers of ‘L’Innocence’ in the garden. Many years ago I visited Upton House in Oxfordshire and in a narrow alleyway on the way into the gardens was a large stone planter packed with hyacinths. The impact of the fragrance was quite incredible and something I’m now thinking I’d like to replicate next spring.

For more scented inspiration for spring take a look at my piece on sweet violets in The Guardian. A traditional cut flower, both here and in France, they’ve sadly fallen out of favour, but there are some fabulous varieties out there. I’m hoping a small patch of these will be another addition to my scented garden in the future.

It would be lovely if you would join in this meme and share the plants which are delighting your nose at the moment.

47 thoughts on “Scent in the Garden”