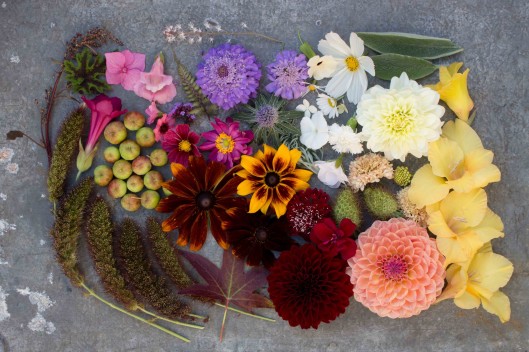 Life is like a maze, sometimes it’s easy to find your way to where you want to go, other times you stumble around coming up to dead ends or not being quite sure of which direction to take.

I’ve never really enjoyed mazes. Wellyman on the other hand, with his more logical, problem solving brain, loves them. He tackled one in Belgium three times in the same afternoon. The second and third times he was unaccompanied. As mazes go Drielandenpunt is pretty impressive. On the borders of Germany, Belgium and the Netherlands it is Europe’s largest hedge maze, created by the English maze designer Adrian Fisher from 17,000 hornbeam trees. Once was enough for me though.

I’m feeling a bit like I’ve been stumbling around in a maze for most of August to be honest which explains my absence from the blog. August always brings a lull. It’s a no man’s land, ideal for those on holiday but a strange void of time for those who aren’t. I was meant to use this month productively and make the most of the quiet spell. We’ve caught up with family and some friends which has been lovely but the admin and tax return still await, silently nagging me as I walk past them piled up on my desk. Other jobs I had hoped to tackle remain on my list and September is approaching fast.

Discombobulated is the word for it. I’m sure the weather hasn’t helped. It is August, isn’t it, and I haven’t slept Sleeping Beauty-like for several months and woken up in November. I need some clarity as my mind has developed a fog which won’t seem to shift. Even my garden and plot aren’t providing the same respite they normally do. I’m not sure if they are actually contributing to some of the fog. They’ve both had to work hard this summer with pots and plants galore and the garden is feeling cramped – perhaps I’m asking too much of it. Certainly the crab apple needs attention as it’s casting too much shade over the end of the garden hence the back border flagging so early this summer. Where it once created pleasant, dappled shade it is now downright gloomy. It feels like I need room to breathe and that the garden needs room to breathe too.

Dahlias from the cut flower patch

But through the fog come the flowers. My love of dahlias grows every year. They just make me smile and I’ve noticed it’s a reaction others have to them too. They are joyful blooms and I want more. I picked some Dahlia ‘Karma Naomi’ and D. ‘Amberglow’ yesterday, along with some other flowers to take to a friend who has just moved into a new home. Ann is a feisty, spirited lady in her seventies who used to be our neighbour when we first moved to the area. She has just taken the plunge and left her home of over 20 years to move into a flat as arthritis takes its toll, so I thought the flowers might bring a smile to her face and they did. On the journey there I had so many people asking about the dahlias. I fear for my bank balance as my dahlia wish list is growing daily thanks largely to all those flower growers I follow on Instagram. Could I devote a whole bed at the plot to just dahlias? Well, half a bed at least.

This one is a bit of a monster. The flowers on D. ‘American Moon’ are big and I love the intricacy of the petals and the flashes of lemon among the pink. It’s a bit tricky to use with other flowers in arrangements as the flower heads are whoppers, but it’s beautiful enough to warrant a vase of its own.

One of the stars of the show this year has been Cosmos ‘Xanthos’. It’s been flowering now since the start of July. I know lots of gardeners shy away from yellow or just don’t like it as a colour. I interviewed a gardener recently who told me she’d told the designer Tom Stuart Smith that she didn’t want any yellow in her garden. He went ahead and added yellow plants and she now loves the colour. I’ve loved ‘Xanthos’. In fact, it might even be my favourite cosmos. I find many of the pink varieties a bit too girly. They conjure up images of cupcakes, frills and candy floss. I’ve loved ‘Xanthos’ because it’s like a hit of acidic lemon juice cutting through all that saccharin sweetness. It looks fabulous planted and arranged with the striking blue of Salvia patens.

Another favourite is Larkspur ‘Misty Lavender’. It has an aged vintage beauty about it even as the petals unfurl. Like all larkspurs it dries really well, retaining its colour beautifully. I have used larkspurs in several projects in my new book The Crafted Garden and have bunches of larkspur drying in my airing cupboard at the moment. I love plants which have other uses, whether it’s a pretty seed pod, petals that dry or fabulous foliage, as well as stunning blooms. In a small space it makes sense to grow plants which can be used for different purposes. 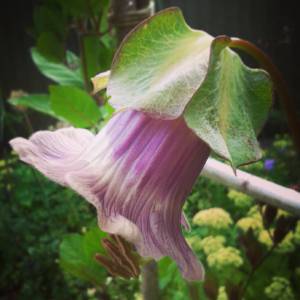 Then there’s Cobaea scandens or the cup and saucer plant. This exotic beauty is finally putting on a show. It’s a tender climber so it only started to flower in August, perhaps a tad reluctantly as grey skies have loomed over head, but it’ll keep going until frost cuts it back. Hopefully that won’t be until well into autumn and then we can enjoy these fabulous flowers for some time yet. I’m growing the purple variety but the fascinating thing is that as the bud opens the flowers are white. When I first saw one open I thought there had been a mix up with the seeds. Then over the next day or so the trumpet started to flush with colour until the whole flower had been transformed into the purple flower I had ordered. They look beautiful climbing up and over the hazel arch Wellyman made for me back in spring.

There was a point when I wondered if I’d have any sunflowers at all this year. At the end of June my Helianthus ‘Italian White’ plants looked dreadful. I always start sunflowers off indoors as slugs will devour seedlings over night. My little plants went into the ground in June about a foot tall with healthy green leaves and they looked fabulous, if I do say so myself. Of course pride comes before a fall and two weeks later they were in a sorry state. Slug-mauled, wind-battered and covered in blackfly. Wellyman attempting to squish the blackfly accidentally decapitated one of the plants too. I wish I’d taken a photo of them but it was too embarrassing. Well the transformation is quite remarkable. I now have 5ft tall lemon-coloured flowers reaching for the sun (desperately hoping they’ll see some). They’re more delicate with smaller flower heads than most sunflowers and I find they are much easier to arrange with other flowers.

Not everything has worked. There have been annoying mix ups with seed varieties and tubers. Chatting with others this seems to be a problem which afflicts most seed and bulb companies. It’s frustrating but occasionally they bring a pleasant surprise. Antirrhinum ‘Snowflake’ has turned out to be a multi-coloured selection with beautiful lemon flowers and striking cerise blooms on fabulously tall stems. Fortunately I don’t grow for weddings otherwise I might be quite grumpy about these unexpected colours in the flower beds.

Through the fog my love of flowers hasn’t diminished and maybe they might even help me to find my way out of this maze.