A sea of snowdrops at Colesbourne Park

If the answer to the title of this post is yes then you probably won’t want to continue reading. I know, I know, you can’t get stirred for galanthomania at this time of year. But lets face it, flowery delights in February are a little thin on the ground, we’ve all had enough of winter and are a bit desperate to see some signs of life in the garden. That’s not to take anything away from the beauty of snowdrops but I do think they owe a certain degree of their popularity to the fact that they bloom so early in the year and there is little else to compete for our attention. For a period of about four weeks from mid-February to mid-March gardens with collections of snowdrops are at their peak and it’s hard to not be blown away by the spectacular sight of carpets of these nodding white flowers as far as the eye can see. In fact it can trick you at first glance into thinking it has snowed and that it’s not actually thousands of flowers. Colesbourne Park in the Cotswolds is our nearest snowdrop heaven. Our last visit, a few years ago, was marred by the discovery the camera battery had barely any charge left and, at the time, we didn’t have a spare. But I’m always happy for an excuse to return to a great garden. 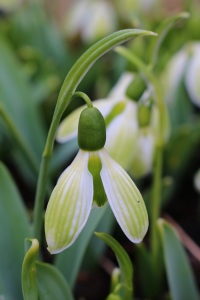 I know it’s not everyone’s cup of tea to have plant labels dotted about and it does make photography a little difficult.  At somewhere like Colesbourne, which is displaying a collection of different varieties, it’s incredibly useful. In fact I’m increasingly finding myself scrabbling around in gardens hoping there’s a label somewhere so I can find out what a particular plant is called. It’s even more important with a plant where the distinctions between some varieties are not that obvious at first glance and perhaps, in the case of snowdrops, even after a few glances. I did hear several ‘they all look the same to me’ comments whispered among visitors as they passed by. I was of this thinking a few years ago when I was just happy to see clumps of snowdrops, but recently I have been slightly bitten by the galanthus bug. When I say slightly I mean I can spot and appreciate the differences between a collection of snowdrops now, but I’m not yet prepared to spend £25 on a tiny pot with one flower and a few leaves in it, let alone the £1390 plus £4 postage paid yesterday for one bulb of Galanthus plicatus ‘Golden Fleece’. My new-found interest has been ignited partly from some of the blogs I read, and partly from Naomi Slade’s book The Plant Lover’s Guide to Snowdrops and the recent talk she gave at the Botanic Gardens in Wales. It was fascinating to wander around Colesbourne on Saturday with my newly appreciative eyes spotting varieties I now recognized and tuning my eyes into the subtle and not so subtle differences between the various varieties.

When you first enter Colesbourne the gentle slope and woodland area is a sea of white. These areas are planted with the common snowdrop Galanthus nivalis, the scented variety ‘S. Arnott’, ‘Hippolyta’, ‘Ophelia’ and ‘James Backhouse’. All have formed substantial clumps and are divided in the summer to increase their populations. The initial snowdrop collection was started by Henry John Elwes in the late nineteenth and early twentieth centuries but it was largely forgotten about until the current owners of Colesbourne, Sir Henry Elwes (the great-grandson of Henry John) and his wife Carolyn, started to uncover plants and build up the collection. We were lucky enough to have a quick chat with Sir Henry and glean a little bit of his expert knowledge. Apparently the best time to divide your snowdrops is in July. At this point in the year there is nothing to be seen of the snowdrops above ground as all the foliage has died back, so at Colesbourne they employ a basic system using coloured sticks. Yellow sticks are placed near the clumps as the leaves die back and white sticks are used to mark areas where there are, as yet, no snowdrops. Then in July they lift the clumps, divide them and replant. When I asked him what was the best method to introduce snowdrops into a garden he said it was with potted bulbs at this time of year.

Small groups of the rarer varieties are planted closer to the house, in borders, raised beds and planters. Displayed this way it’s easier to appreciate what makes them so special. My own favourites were the unusual ivory, green-tinged variety Galanthus ‘Rosemary Burnham’ and the green, frilly petticoated ‘Jaquenetta’ (see above photos). I loved the stone troughs that were dotted about with snowdrops planted alongside iris and cyclamen. Snowdrops can be tricky in containers but large ones like this trough would be worth trying.

Snowdrops aren’t the only attraction to Colesbourne. They have incorporated other winter and early spring-flowering plants. I don’t think I’ve seen such large vibrant clusters of Cyclamen coum, the shocking pink flowers shouting out at you. There’s a growing collection of hellebores, gloriously scented winter honeysuckles and viburnum. It’s a magical spot. Apart from the gentle hum of visitors chatting, the valley in which the estate sits is incredibly peaceful and there’s a real feeling of modern life not intruding. This is an old estate with classic parkland, mossy stone balustrades and urns, and a tiny church. The lake, created to provide hydro-electric power for the house, is stunningly and ethereally blue. It’s believed the colour is due to the colloidal clay in the water.

There’s still time to kick off the garden visiting season with some fantastic displays across the country of snowdrops and early spring flowers. I’d love to hear about your favourite gardens to visit at this time of year.