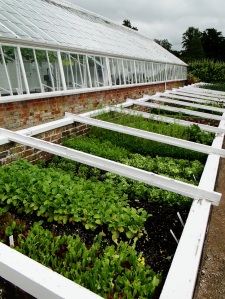 I love walled gardens. There’s the sense of intrigue as to what lies behind those solid, sturdy walls and a feeling that I’m stepping into another world, somewhere where the distractions of life won’t trouble me. It feels as if the walls envelop me like a hug protecting me like they do the plants that grow within the boundary. All walled gardens have a magical air about them, but it’s the classic Victorian versions that are the true pinnacle for me. 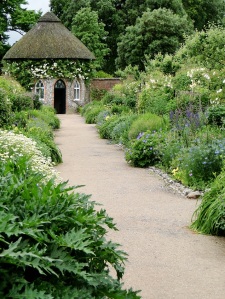 I’ll admit I’m someone who lives by the phrase ‘a place for everything and everything in its place’. I’ve always been like it. My parents were never subjected to the horror of a teenager’s messy bedroom with mounds of clothing in the ‘floordrobe’ and items of food left to cultivate an impressive range of moulds. It stood me in good stead for the poky student digs I lived in and the tiny ‘can’t swing a cat’ flat we rented when we first got married. Now I find it hard to write if I know the kitchen is in a bit of a state i.e. Wellyman has been baking again, even if I’m upstairs and the plumes of flour are downstairs. I’ve heard that it’s not unusual for writers to feel they can’t work unless the space around them is tidy – a cluttered house, a cluttered mind perhaps. And I have a bit of a theory that my slightly obsessive tidiness is why I have such a thing for Victorian walled gardens. I drool over the neatly arranged potting sheds and the rows of wheel barrows lined up ready for use. The rows of little plants germinating in perfect rows make me think of my own pathetic attempts where clumps of seedlings are interspersed with bare patches.

West Dean, near Chichester in West Sussex, is a magnificent example of a Victorian walled garden restored to its prime and two summers ago I finally managed to visit. Head gardeners Jim Buckland and Sarah Wain have spent over twenty years bringing the gardens and the wider estate back to its former glory days.

Like any grand house in 19th century Britain, West Dean wanted and needed a kitchen garden and orchard to supply the house with food, and it was a notable place with King Edward VII a regular visitor enjoying pheasant shoots held on the estate. The orchard is enclosed within walls. Walled gardens are often thought of as providing protection from the weather but often it was more to do with protecting valuable produce from animals and hungry humans. The fruit collection is impressive with some of the fanciest trained trees I have ever seen, including heritage varieties specific to West Sussex. The walls are put to good use with pears, apples and plums trained against them but there are also specimens dotted about that have been intricately contorted into goblets and domes. Two herbaceous borders run through this walled garden too, offering an ornamental touch to what are often considered purely productive spaces. Although these borders would have been a clever way of supplementing the cutting patch to provide the house with vases of home-grown blooms.

Ah ha! The cutting patch, now this was a bit of a surprise. I walked through a gateway in the wall into another enclosed space and what was the real hub of the walled garden, with rows of the original cold frames, potting sheds and glistening glasshouses. On the left hand side were beds and borders planted with the sole purpose of supplying flowers for cutting. Needless to say I was in my element. I do love the sense of order created by rows of plants and I think this is why I’ve found growing on my allotment easier than designing and planting my garden.

Beyond this was the walled kitchen garden where every bit of the space was used to its full potential. Red and white currants were trained against the walls of a shed now used as an information centre, herbs lined the edges of beds and cane fruits, such as raspberries, were grown in neat rows.

One of West Dean’s stunning glasshouses

The glasshouses were quite something. I have been to many a walled garden where glasshouses lie unused and forlorn, shades of their former selves, crying out to be loved and filled with plants. Victorian walled gardens are nothing without these buildings. Clever engineering coupled with the ingenuity of 19th growers meant that in a time before air freight and the mass importation of food, crops such as pineapples, peaches, apricots, melons and citrus fruits not suited to our climate could be produced to grace the tables of the wealthy. The sight of the restored glasshouses at West Dean is something very special. There was the peach house with fat, juicy, hairy fruits dripping from a beautifully trained tree, melons dangling from above in another, there were glistening black aubergines and a fantastic array of chillies. There was the glasshouse devoted to tender plants we recognise as house plants. I’ve never been much of a house plant lover but the collections of succulents, streptocarpus, begonias and fabulous stag’s horn ferns were enough to make me change my mind. 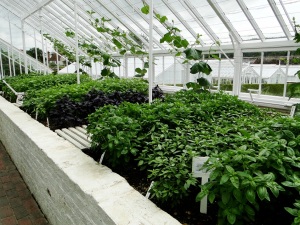 Filled with basil. That would make quite a lot of pesto!

It’s incredible to think these glasshouses were completely derelict in the 1990s. They were originally built at the end of the nineteenth century by Foster and Pearson of Nottinghamshire whose client list read like a who’s who of late Victorian high society and included Queen Victoria herself. The glasshouses were an ostentatious symbol of wealth. Only the richest in society could afford these creations and the teams of workers needed to put them to full use. Now though they are not just a symbol of that wealth but also one of our most precious links with our horticultural heritage and the skills, knowledge and hard work of the gardeners who worked there. The glasshouses underwent a restoration process in the 1990s but two of the glasshouses are in need of urgent attention once again. The team at West Dean need to raise £30,000 to repair just one of the glasshouses.

If you’d like to help you can donate. Just £10 could pay for 1kg of nails and a sense of satisfaction that you have helped to save these precious buildings for the future.