I’m in a bit of a daze at the moment. Some of it is due to a lack of sleep. We appear to have mice or squirrels in the loft/wall cavities which sound like they are performing their own version of Strictly Come Dancing throughout the night, right above our bedroom. Wellyman and I weren’t keen on the idea it might be a rat so thought we’d refer to it as a squirrel in the hope that would make it all better when lying there at 4am listening to some hobnail booted creatures above our heads. But it turns out rats are preferable to squirrels on the sliding scale of unwanted creatures in your loft. Squirrels, according to the pest control guy, are the animal equivalent of a teenager left home alone. I’ve always had a soft spot for squirrels, even the unloved greys, but apparently they will cause a scene of devastation given half the chance. Not a particularly comforting thought as it seems, on initial inspection, unlikely to be rats. Lets hope for mice then, although it’s hard to imagine something which can squeeze through a gap as narrow as a pen can make so much noise that even Wellyman is roused from sleep.

Only two hours slumber was probably not the best preparation for my day out in London last week. My publisher had invited me along to the Garden Media Guild Awards at a rather swanky hotel on Park Lane. So I ditched the wellies and jeans in favour of heels and a frock and headed east. The awards recognise the best in broadcasting, books, print, photography and online media in relation to gardening. Many of those attending are freelance so I suppose the event doubles as a bit of a Christmas do for those who wouldn’t otherwise get the chance to end the year with a bit of a party. Although everyone seemed much too well-behaved for it to resemble a true Christmas party. I wish I could post up some photographs but the ballroom was strangely lit with green lights. Maybe they thought it appropriate as we were all gardeners but it gave everything an odd Kermit-like tinge. It was lovely to meet up with fellow bloggers Michelle, Petra and Naomi. Alan Titchmarsh made an impassioned ‘I have a dream speech’ about the future of gardening and horticulture, Carol Klein looked very glamorous and Matthew Wilson managed to keep the post-lunch (and wine) audience under control. Dr Hessayon, he of the ‘Expert’ books fame, took to the stage to present an award and made a speech, a speech which was oddly misreported in several newspapers. There was much consternation on Twitter from those who had been there – had we really missed the standing ovation? Turns out you shouldn’t believe everything you read in the newspapers. I was really happy for Jason Ingram, who took the photographs for my book, when he won ‘Photographer of the Year’. Then it was time to leave; the matchsticks would hold my eyelids open no more. I did have to navigate a room of over 300 people with my goody bag first though. I’m sure the idea behind using a watering can as the receptacle for a variety of gardening related gifts rather than an actual bag seemed like a great idea on paper, the recipients were after all a group of gardeners. On the other hand the very long pointy spout was an accident waiting to happen. Numerous groins and a pregnant lady narrowly missed a poke from me but I thought it was safest to make my exit when I realised I had been stood with the spout only millimeters away from the ear of a man who was sitting down behind me. Still, I guess a watering can was an improvement on an axe, the gift given to all the guests a few years ago. 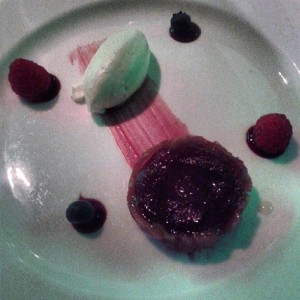 Delicious food at the GMG awards, shame about the green lighting

Then there was the long trip home before heading off the next day on another long journey to visit family in the north-east for the weekend. And now I’m back home and it’s December and I feel completely unprepared for everything this month demands. The garden and allotment demand little or no attention at this time of year which is just as well really. I miss the fresh air and exercise of a morning spent gardening but I’m enjoying the break this year more than in the past. Scouring seed and plant catalogues and the internet for ideas for projects I’ll be working on next year is exciting but daunting also. Where will I fit it all? Am I biting off more than I can chew? There are the first signs of new life on the plot as daffodils poke through the bare soil, encouraged by the mild autumn. It’s surprisingly how the sight of just a few fat green shoots can spark a feeling of positivity and creativity but they did. It’s going to be a hectic few weeks but I’m determined to get out into the garden and have a poke about in search of new life. As we move closer to the shortest day it makes all the difference to my mood to be reminded spring won’t be too far away. 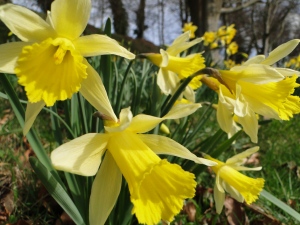