I do love autumn, the mellow colours, misty mornings, bowls of soup, fruity crumbles, woodland walks and the smell of leaf litter but it’s been a struggle this year to embrace the changing seasons. A holiday by the Cornish coast last week went some way towards easing me into October though.

Some glorious weather gave us the opportunity to walk the coastal path where brambles were laden with fruit. In previous, warmer, summers the blackberry crop has ripened much earlier. Two years ago we were bramble picking in mid-August in the Forest of Dean with the whole crop gone a month later; the contrast this year is quite remarkable.

I’m always quite amazed at just what will grow in such an exposed location. At the extremities of the British Isles the north Cornish coast often bears the brunt of Atlantic storms and much of the ground is either rocky with little topsoil or is made up of a significant amount of sand. Summer flowering plants, such as the umbellifers wild angelica and hogweed, had died leaving behind the skeletal forms of stalks and seedheads. Bleached  blond by the sun and salt-laden wind they looked beautiful against the blue sky and golden sand. 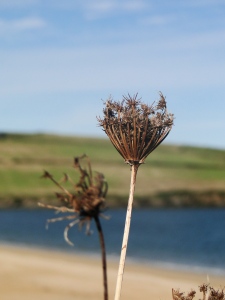 There were the seedheads of wild carrot curling back in on themselves and those of the common ragwort, rusty brown in their final stage of maturity.

The fresh green of spring and the vibrant pinks, blues and yellows may have been replaced by faded, muted tones of browns and beiges but I rather like these forms left by these wild flowers, such as the papery pom poms of sea thrift.

I was surprised to see some plants still flowering. Valerian in its pink, red and whites forms must have one of the longest flowering periods of all herbaceous perennials. In my own garden, it flowers from June through to the first frosts, generally at some point in October but in the mild maritime climate of Cornwall it flowers earlier and will continue into November.

Primrose yellow is not really a colour I would associate with autumn but this is the prime time to see toadflax, Linaria vulgaris, and its snapdragon/aquilegia hybrid-like flowers. The blooms are designed just like antirrhinums with a bottom lip-like flower part which lowers when an insect such as a bee lands on it, allowing the insect access to the pollen and nectar inside. Bees are attracted to this part of the flower by the deeper yellow, sometimes orange, markings guiding them to where the sugary rewards for pollination are to be found. The back of the flower has a spur just like those found on aquilegias.

In amongst the sand dunes were the seedheads of sea plantain and sea spurge still flowering, relatives of plants we’re more use to seeing in our garden borders and lawn, these varieties have adapted to the coastal conditions. Sea plantain, in fact, is often found growing in salt marshes and is one of few plants that can cope with such high salinity.

Conditions may be tough for plants along the coast but occasionally there was a reminder of one of the great benefits of living on this southern tip of Britain. The lack of hard frosts here and the generally milder air drawn up by the gulf stream allows for a wider range of plants to be grown and whilst many flowers are fading in my own garden they are still blooming profusely here in Cornwall. As the path dipped down out of the prevailing wind we came across this shot of colour from these nasturtiums sprawling across the bank of this little slipway.

I just wanted to say thanks to everyone who wished me a great holiday. It was good to switch off. Of course, it takes a while to get back into gear after a spell away, well it does for me. Once the pile of washing and ironing has diminished I’m looking forward to catching up with all your blogs again.