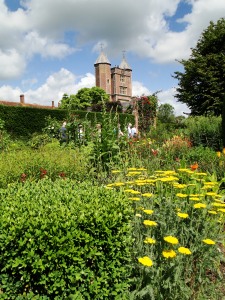 Sissinghurst’s tower from the cottage garden

The buildings and ruins of Sissinghurst Castle maybe noteworthy attractions themselves, reminders of Elizabethan Britain but it is the gardens, created in the 1930s by the author, Vita Sackville-West, that people flock to see. Described in my Good Gardens Guide as, ‘one of the outstanding gardens of the world’, we hadn’t initially planned to visit but it seemed to crazy to be so close and not see such a prestigious garden. 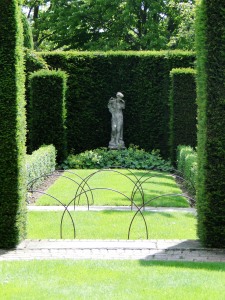 Now under the care of the National Trust the 9 acre garden and surrounds are undeniably beautiful, a true evocation of an English garden. Inspired by the gardeners of the day; Edwin Lutyens, Gertrude Jekyll and Lawrence Johnston, Vita and her husband Harold Nicolson set about creating a garden that was, as Vita described, ‘Profusion, even extravagance and exuberance within the confines of the utmost linear severity’. Vita was self-taught but word of her accomplishments spread and, although known as a poet and novelist, she went on to write a gardening column for a national newspaper and produced a series of popular gardening books. Visitors have been coming to Sissinghurst’s gardens since 1937 where they would put a shilling in a tin, often walking around the gardens as Vita and Harold gardened. 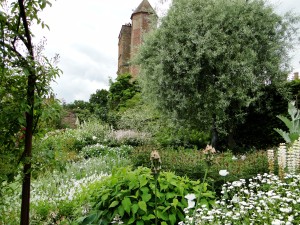 Famous for its ‘rooms’ in which separate gardens were created, immaculately clipped hedges form the walls and corridors and the backdrop to the romantic planting schemes within. There are roses at every turn and areas with particular colour themes, such as the yellow and orange cottage garden and the most famous area of Sissinghurst, the white garden. The lawns are pristinely striped and vistas have been created to catch the eye, finishing with focal point sculptures and statues that they both collected on their foreign travels. 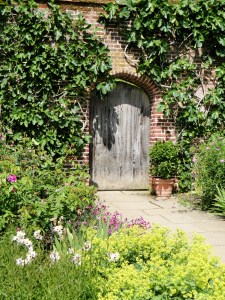 I loved this old gate and the plants around it.

Paths wend through the garden taking you to different areas such as the shady nuttery and the only herb garden I’ve visited where you can smell the aroma of the herbs without having to touch the plants. There was a meadow area along the lines of Great Dixter but it has yet to achieve the same diversity of species, and thus, the same visual impact. It was still teeming with insects and was probably where the little creatures that took a fancy to my calves were lying in wait. Only now, a week, several antihistamines and steroid cream applications later is my leg returning to normal. I’d be no good on safari in Kenya! 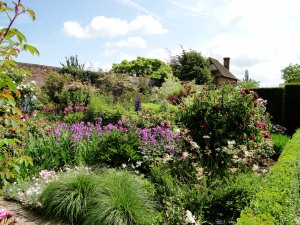 It’s possible to walk alongside the moat, the only remaining part of the original Saxon manor house, the first recorded building on this site and look across the orchard to the medieval tower that forms such an integral part to the garden. Just like at Great Dixter the buildings provide the gardens with a stunning backdrop and add another dimension to the garden by allowing visitors to view the garden from above, if they are prepared to climb the 78 steps of the tower. I loved this aspect, a view rarely available to the garden visitor, which meant you could see the ‘linear severity’ of the hedging and paths that Vita had talked about. 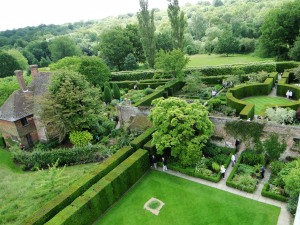 Looking down over the gardens from the tower

Outside the garden, in fields behind the oast houses and barns, is the vegetable garden created in 2008 and awarded Soil Association organic status in 2011. Here a mixture of fruit, vegetables and cut flowers are produced to supply the on-site cafe.

However, unlike Great Dixter and Pashley Manor there is a ‘but’ with Sissinghurst. I can’t quite put my finger on it but for a garden described as one of the best in the world I was a little underwhelmed. Horticulturally, it was frustrating to see so much bare earth in such a garden in the height of the growing season. Most evident in the much-lauded white garden which affected the potential impact the garden could have had. I loved the concept and there were areas that worked so well it was just disppointing other parts were so bare. Maybe we wouldn’t have noticed so much but after the exuberance of Great Dixter it was quite striking. There may have been reasons for this but there was nothing explaining the thinking behind this, if there was any. 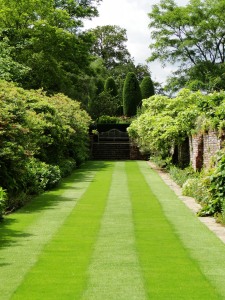 The National Trust in their role as manager of Sissinghurst have a difficult job to do, protecting the gardens for future generations. Do they try to keep the gardens in the form that Vita created them or do they allow the gardens to evolve? I don’t have too much problem with ‘historical gardens’ as such, as long as the visitors know what they’re getting. You would expect to visit a museum and see objects with information putting them into context and, in the same vein, I feel an historical garden needs the same information. Of course, the dilemma then is how to convey this knowledge in an unobtrusive way. I feel though, that at present Sissinghurst is in a bit of a limbo, not sure how the gardens should be treated. 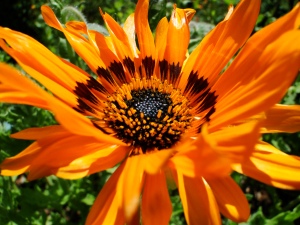 Gazanias zinging in the sunshine

There are also elements of the National Trust experience that I find increasingly annoying. I love the National Trust; they have saved and protected so many beautiful places for the nation but for those of us that are not members the push to get you to sign up for a year is becoming a bit irritating. And don’t get me started on the food. Yes, I know food again but it was overpriced for what was offered and lacking imagination, which was disappointing for somewhere that had made so much of the organic produce that was being used from the kitchen garden. Haven’t we moved on from a few bits of lettuce, tomatoes and cucumber counting as a salad?

Inevitably, the crowds of people have an impact on the enjoyment of such a place. Of course, we were a part of those crowds too but it can feel a little like you’re on some sort of garden tread mill as you shuffle around paths attempting to take photographs and not getting in the way of staff mowing and gardening. The ultimate garden experience for me is somewhere that makes me feel relaxed. Sissinghurst, beautiful and incredibly designed as it is, ended up feeling too much like one of those places on the sightseeing list you cross off. A bit like if you Venice or somewhere similar; you’ll do the touristy bits but then it’s quite a relief to be able to wander off down the little side streets. I’m not sure how this can be addressed at such popular gardens, timed tickets possibly? 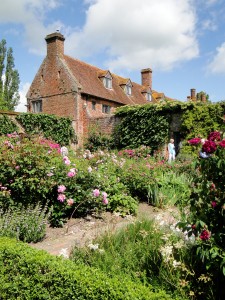 The rose garden looking back towards the manor house

Having looked back over the photos I can see why Sissinghurst has such a reputation but it’s a shame other elements of the visit actually spoilt the experience on the day. I’d still recommend a visit, just be prepared for lots of people, even during the week, and take a picnic.

For more information on Sissinghurst visit the National Trust’s website.