Chelsea Flower Show is packed with so much to see that it’s a bit hard to take it all in when you’re actually there. Scrolling through the photos once I got home and seeing the coverage on TV always makes me wish I could pop back for another visit to soak it all up in a slightly less frantic way.

Where else would you see an orang-utan, a rose-bud encrusted gorilla, a £200,000 conservatory, bump into Christopher Biggins and see World War One commemorated with plants? The person dressed up as an orang-utan wandering around the World Vision garden seemed a bit random. The attention to detail on the rose-bud gorilla was incredible – there was a lavender elephant too – but I did wonder how anyone would have the patience to create such sculptures and whilst they smelt amazing, I couldn’t work out who would buy one. That’s a thought which quite often creeps into your head at Chelsea. As spectacular as the Khora dome-roofed conservatory was it’s hard to imagine who would part with £200,000 for such a building. But those hospitality tents at Chelsea aren’t there just to feed and water the plant lovers who visit over the course of the week. As Ed Cumming’s wrote last year in The Telegraph, Chelsea has become a place for big businesses, politicians and dignitaries to network. Who knows, perhaps Khora’s order book will be full by the end of the week. 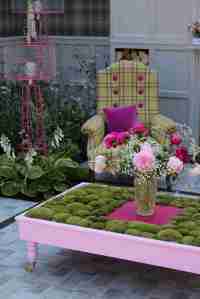 The Fresh Gardens are smaller spaces with a more contemporary feel. The’ In the Mind’s Eye’ Garden for the RNIB was fantastic. Designed as a sensory garden it had water, textural planting and vibrant colours. The colour combinations in some of the borders might not appeal to everyone as there was a lot going on but it was designed with those with visual impairments in mind where extra colours and contrast are important. I was so pleased this won ‘Best in Show’ in its category. The quirky House of Fraser Garden really caught my eye. I loved the colours on display and the idea that textile design can be inspired by nature. 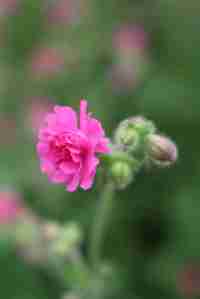 In the Great Pavilion I came across this beauty, Silene diocia ‘Firefly’. I wonder if it would make a good cut flower? 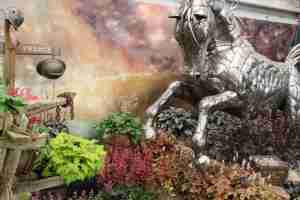 I thought the Heucheraholics stand commemorating the First World War was outstanding.

The Hillier’s exhibit was something else. They take their displays at Chelsea to another level with trees as tall as the pavilion and so many plants packed into their space it was quite breathtaking.

The Chelsea Florist of the Year competition and the row of dresses decorated with flowers and plant material was really inspiring and I took an epic amount of photos of the incredible detail.

And who could resist a photo on this cutie? He was one of the dogs brought in to check the showground for explosives before the Queen arrived. Tail wagging, he was lead into the gardens sniffing for anything untoward. They’re obviously trained to not to eat anything they shouldn’t. Imagine if they got a rogue dog in one year who took a fancy to some violas or who cocked his leg on a box ball.

My favourite part of Chelsea has to be the Serpentine Walk in a leafy area where you’ll find the Artisan Gardens. In this quiet secluded spot it’s much easier to appreciate the gardens and plants. I wish the RHS would devote a separate space to the Fresh Gardens. In my opinion, the Fresh Gardens suffer from being just off Main Avenue in front of the Great Pavilion – there’s just so much competing for your attention. It’s often hard to know what’s a garden and what’s a trade stand. I thought the planting on Jo Thompson’s ‘Town Square’ Garden was so beautiful but it all got rather lost in amongst the giant potpourri animals and expensive barbecues. How different it would have been if Jo’s garden had been placed in a similar setting to the Artisan Gardens.

So that’s it for another year but there’s plenty for me to take away from Chelsea 2014. I’ll be seeking out plum and wine coloured flowers for my cutting patch next year. I’m hoping to take inspiration from the floral dresses for the book I’m working on and, thanks to Mr Kazuyuki, I want to learn more about Japanese gardens.