I’ve lived in south Wales for nearly six years now but today was my first visit to the RHS show in Cardiff. It’s the first of the outdoor shows, kicking off the gardening calendar and for the last two years has been the culmination of National Gardening Week.

I think in the past I’ve been put off by the timing of the show. Held in April it does suffer from the vagaries of the weather. I have a friend who has visited for the last few years and needed her winter down-filled coat one year and was in a summery dress the following year. Having said that with our changing climate you could probably say that about August. I did think it was about time I supported my local show though. I recently read that the Edible Garden Show, normally held near Coventry, is now moving to a new home in London and think it’s a pity that everything gravitates towards the capital. I’ve also been hunkered down in my study and/or greenhouse for the last few weeks working on my book and growing my plants as the deadline looms ever closer, so felt like I deserved a day out. So with that in mind Cardiff beckoned.

The show is set in Bute Park, the grounds of Cardiff Castle, in the city centre.  It’s smaller than other RHS shows and more compact but these weren’t negatives by any means. You need stamina for the other shows, particularly if you’re on a plant buying mission. My day at Cardiff was a much more relaxed and leisurely experience. That’s not to say I didn’t come armed with a shopping list. Thanks to the RHS’s great website I had already had a look through the nurseries that would be participating, so I had an idea about what I’d be looking for. Staddon Farm Nurseries and their Primula sieboldii collection was too hard to resist particularly in light of my new found primula plant addiction. There was a visit to Sea Spring Seeds’ stand. I had seen their stunning collection of colourful chillies at the Abergavenny Food Festival last year and having run out of space to germinate any more seeds I made a bee-line for their young plants. I plumped for Hungarian Hot Wax. A paltry 6,000 on the scoville heatness scale but then both Wellyman and I are wusses when it comes to spicy food.

I loved that there were quite a few school groups there, wandering around, having a look at the show gardens and the floral marquees. Some of them had entered the wheelbarrow garden competition that was on display near the entrance to the showground. An inspired idea with some brilliantly inventive designs, lets hope it inspires some budding gardeners for the future.

Considering the prolonged cold start to the year and, up until very recently, the lack of anything remotely spring-like it was amazing that the nurseries in the marquees put on such a stunning show. I think my favourite had to be R A Scamp Daffodils from Falmouth in Cornwall.

Perhaps the weakest element of this event were the show gardens. They were small and some lacking in any great design or even plants in some cases. Having said that I loved the colours and ideas behind Wade and Nicol Landscape’s ‘Up-cycle’ garden. Wellyman has already been tasked with making some wooden pallet seats for the garden this year.

The weather is looking settled for the weekend so if you fancy a spot of gardening indulgence pop along to Cardiff, you won’t be disappointed.

On the theme of RHS shows, would you like the chance to win tickets to this year’s Chelsea Flower Show. The clothing company Jacques Vert contacted me to say that they are running a competition and would I mention it on my blog. This isn’t an endorsement for them and I don’t receive anything for this but I thought it could be a great opportunity for you to be in with the chance of winning tickets. The prize is two tickets to RHS Chelsea Show for Friday 24th May 2013. Travel and accommodation are NOT included. The closing date is midnight Tuesday 7th May and the winner will be notified by email by 9th May. You need to be over 18 to enter. If you fancy giving it a go you can enter at the Jacques Vert blog.   Good Luck!

Over the last decade or so it is hard to deny that there has been a bit of a revolution in the way we approach food in this country. For years we, and others, thought our food was dreadful, we were the poor relation culinary wise, not just in Europe but in the world. Our food industry had, and still does, to some extent suffer from the intensification of agriculture needed during the Second World War. Small scale producers found it increasingly difficult to compete with large companies and then the supermarkets came along and food became about convenience. People no longer wanted to spend time making food, ready meals and microwaves were the way forward. I can remember watching Tomorrow’s World and there being a story about us only needing to swallow a pill in the future and we would get all our nutritional needs that way. *shudders*

But things have changed, nowhere near enough, I’ll admit, but we are no longer seen as a culinary desert. We are learning to celebrate our food and nowhere is this most evident than at the Abergavenny Food Festival. Held on the second weekend in September, people from all over flock to the small market town on the edge of the Brecon Beacon National Park. September and October have traditionally been the months of harvest festivals and ever since man started to grow their own food I imagine that early autumn was seen as a time of abundance, a time to be thankful for the crop that year. Over the last decade or so food festivals, like the one at Abergavenny, have sprung up all over the country and are, I think, a modern day version of the harvest festival.

Abergavenny is only a short drive from my home and I can’t quite believe my luck that we have such a great event on our doorstep. Food producers from the local area and beyond set up stalls in the town centre and the market hall selling their wares. There are plenty of opportunities to taste and stock up the fridge and larder for autumn and winter. 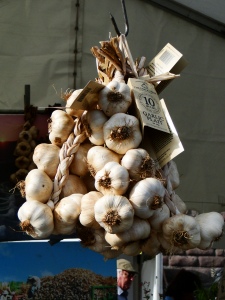 At various venues there are talks from chefs and food producers giving an insight into subjects as varied as the wonders of garlic and foraging to urban growing and setting up a rural skills centre.

There is a great buzz to the town, so with cool bags at the ready we set about the ever so slightly daunting task of navigating ourselves around so much tasty food.

There can’t be many occasions when you have sampled pumpernickel bread, a variety of goats cheeses, rose petal syrup, roasted seeds, crayfish tails, raw chocolate, lavender jelly and a shot of Herefordshire gin all before 11am and all this was topped off with smoked salmon and bubble and squeak for lunch. It’s certainly a test of your digestive system and reading the list now, makes me feel slightly queasy. Where’s that mint tea? 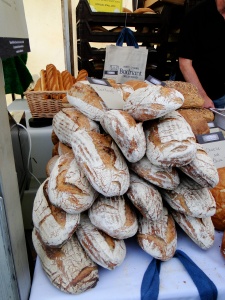 It shows how far we’ve come though, as a country, in regards to food. There was a whole range of food I hadn’t eaten until I went to university. I can’t imagine cooking now without ingredients such as aubergines, peppers, hummus and pesto but these were foods I’d never come across until I was in my twenties; they were the staples of health food shops rather than supermarkets, seen only as foods for hippies but now they are ubiquitous. The wealth of produce on offer now however, is quite incredible, from smoked garlic and goats meat to wild boar and pickled unripe blackberries. We’ve rediscovered classic British recipes but by using the best ingredients it has meant they can rival any other cuisine. We’ve also started to produce our own versions of classic foods from around the world such as our own charcuterie, mozzarella and parmesan.

My favourite stalls were the Isle of Wight Garlic Farm, along with the colourful chillies from Sea Spring Seeds. Jekka McVicar’s herb stall is always a treasure trove of the most essential herbs for cooking and something a little bit different, such as ginger mint. Probably the best discovery though, was the Forage Fine Foods stand. The brainchild of Liz Knight, there were all sorts of concoctions made from wild, foraged foods such as the elderberry viniagrette or from locally grown produce such as the herb garden rub which could be used on meat. My favourite had to be the rose petal preserve. I’ve always been a bit wary of floral scented food products, I think I was scarred as a child by being given parma violets. As a result, I thought everything with flowers in it would taste like old fashioned soap but this rose petal preserve was so delicious. The taste of a British garden in June. I know that sounds a little strange but believe me it was lovely and would be delicious on ice cream, pancakes, sponge cakes, even porridge.

Events like this are a great way of trying different foods and ingredients without having to buy lots of jars only to find you’re not that keen on something. Here you can try until you can take no more and then, when you find those products that tickle your taste buds, you can make your purchase safe in the knowledge it won’t sit at the back of your cupboard unused for years.

Abergavenny may be over for this year but over the next couple of months there will be foodie festivals the length and breadth of the country. Hopefully I might get to squeeze in a few more but for now I’ve got to go and find some recipes for goats meat!