Most of us crave the familiar. The security and safety it brings, the sense of belonging and rootedness to a place. There is something very comforting about walking a path that is so well trodden you feel you know every twist and turn, every little patch of hedgerow, every tree. Then there are times when all you want to do is get away, when the familiarity of the daily routine has become claustrophobic and a change of scene is needed.

Wellyman and I had both got to that point several weeks ago but he had an exam to revise for which meant any get-away had to be put on hold. Wellyman is studying for an Open University degree. It’s a part-time course and he’s fitting it in around his job. It’s not the quickest way to get a degree, taking six years in total and it has been a huge commitment but he’s getting there with only 2 years left now. I’m immensely proud of the work he’s putting in but there is a collective sigh of relief when he finishes each year and there’s a three month break before the next one starts. So as soon as his exam was over last week we were off for a short break to Edinburgh.

When we left Wales it still felt like summer, mild and sunny, but it was distinctly autumnal by the time we’d reached Edinburgh. Leaves were swirling around in the wind coming in from the North Sea which had an icy chill that I remember from my days as a student in Newcastle. I’m not really a city girl, too much traffic and concrete make me feel uncomfortable but Edinburgh is such a green city and I was surprised at how at home I felt there.

The glasshouse at the Royal Botanic Gardens Edinburgh

We were staying in a leafy suburb which turned out to be only a ten minute walk away from the Royal Botanic Gardens. I’d love to claim that it was planned that way but it was a happy coincidence. The gardens themselves are free, you just pay to enter the glasshouses. The 70 acres of grounds felt much more like a park with a stunning collection of trees. What an amazing resource to have on your doorstep for free. The glasshouses were impressive and so toasty and warm it was tempting just to stay in there all day. I wonder if, as the weather gets colder, the staff engineer all sorts of ways to make sure they can work inside, in the warmth? 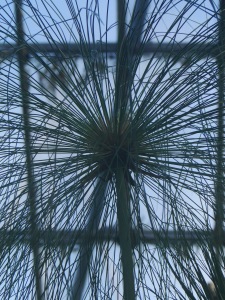 Cyperus papyrus against the backdrop of the glasshouse roof.

Later that day we were seven floors up on the rooftop garden of the National Museum of Scotland taking in the impressive view across the skyline of the city. I’m not sure how many of the tourists noticed the planting around the edge of the viewing point, the castle being the main draw, but it was an interesting addition showcasing plants from Scottish habitats with coastal plants, alpines and a planter featuring species adapted to boggy conditions. If I was a plant though I think I’d rather be one of those in the warmth of the botanic garden’s glasshouses. 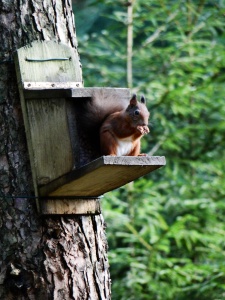 On our last day the countryside outside the city was calling. Only an hour or so north was the eastern edge of the Loch Lomond National Park and the range of hills known as the Trossachs. The scenery was stunning with the burnt umber colour of dying bracken spreading across the hillsides, the yellowing leaves of birch and beech and tumbling waterfalls. The highlight of the day and an unexpected treat was seeing red squirrels. The visitor book attested to the fact that they were there but after sitting in the hide for 20 minutes or so we started to think it wasn’t going to be our day. Then Wellyman whispered ‘SQUIRREL’ and there it was scampering around collecting nuts and burying them. They are such delightful creatures which can’t fail to make you smile especially when all you can see is their big bushy tail sticking out of a bird feeder. It’s only the second time I have seen red squirrels, our native species which is under threat from the non-native greys. 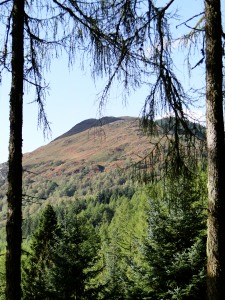 I have never seen trees covered in so much lichen. They were dripping in them. And there were fungi dotting the forest floor and clinging to the sides of trees, species we had never seen before. At one point we came across a mossy area covered in clumps of black. They looked like piles of cow dung but on closer inspection we could see they were fungi. It was a stunning place, somewhere which left us wanting more. 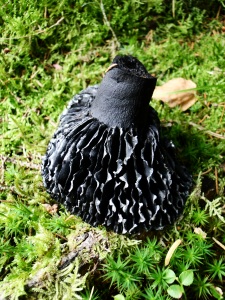 Long journeys are fun when you’re travelling to your holiday destination, the return however is nearly always a bind. Misty and murky weather, heavy traffic and hour upon hour of motorway provide too much time for thinking with that post-holiday clarity that makes you question where you’re going and what you’re doing. Holidays provide a change that we’re craving, change can be unsettling though and I guess that’s why many of us have post-break blues. It’s generally not long before fanciful ideas of packing up and travelling or moving somewhere else get lost in the routine of daily life. But time away can make us see the familiar in a positive way too. We were only away for 4 days but the seasonal difference was quite distinct on our return. The garden we left had been clinging on to summer remarkably well. Looking out of the kitchen window this morning it is clearly autumn. The Virginia creeper is turning red, as is the liquidambar. The thin strap-like leaves of Anemanthele lessoniana have tinges of orange and there is a soggy look of decay to the herbaceous perennials, but still no frost means Verbena bonariensis and cosmos are providing shots of colour. These changes wouldn’t have been nearly so distinct if I had been staring at the garden every day. Seeing the seasonal evolution in the garden has also triggered a sense of urgency to tackle my list of jobs before my inclination for hibernation takes over completely. Now if the weather would oblige with some dry days that would be much appreciated.