Who’d have thought that several weeks ago when we were being deluged with rain we would end up being treated to such a beautiful start to March; the clearest of blue skies and a gentle warmth to the sun. I’d be happy enough with this sort of weather in the height of summer let alone at the beginning of spring. Of course, spring can have a sting in its tail. Few of us need reminding of last year’s weather with a surprise cold snap dragging on well into June. Lets hope for growers and farmers alike that spring eases gently into summer this time around.

The prolonged period of dry weather has been perfect to get out and tackle all those jobs which were starting to mount up. I know this will sound a bit odd but one of the jobs I most look forward to is emptying the shed. After spending all winter barely being able to get into the place it’s a relief to free it of its winter clutter. There tends to be a point around mid-February where I’ve given up all hope or pretence of being able to keep the shed tidy. Visits to the shed involve little more than standing at the door and shoving in whatever needs storing in there as best I can. Wellyman might occasionally be wandering around looking for something and say, ‘I think that might be in the shed’. There’s a hopeful look on his face as he contemplates going to look for whatever it is until he realises the folly of this idea and its rediscovery will have to wait until spring. It’s all been made worse this winter because of the torrents of rain. When we had the brick path in the garden put in for some unknown reason the builder sloped the path down towards the shed. It’s not a steep slope, in fact it’s barely perceptible. The result though is even just an average amount of rain simply washes down the bricks and settles on the concrete floor of the shed where it refuses to drain away. This winter the floor of the shed was one large puddle from December until the middle of last week. Still considering the impact the storms had on so many we have got off incredibly lightly. 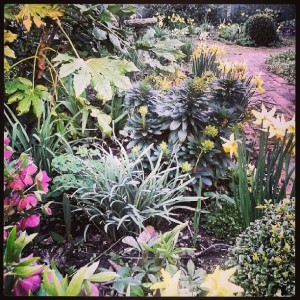 It makes such a difference having a run of several dry days making it possible to get sooooo much done. Seeds have been sown and are germinating nicely, roses have been pruned, the garden and allotment weeded. Grass paths at the plot have been edged and green manure cut back and dug in. The autumn raspberries were pruned, although it was a mistake to forget my gloves. Once I was at the plot though I couldn’t be bothered to walk back home to get them, I knew I’d probably end up making a cup of tea and not coming back. So I went ahead with the pruning anyway … gingerly. I was grateful for the stretchy long sleeves of my old jumper which provided a degree of protection but not enough if my scratched hands the following day were anything to go by. 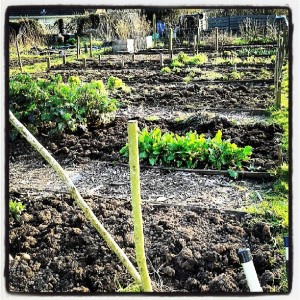 My spruced up allotment

Then there was the mulching. I still find it hard to believe when we live in an area surrounded by farmers and stables that the allotments can’t get hold of a good source of manure. A lack of tow bars and trailers on our part and an unwillingness to deliver by the those with the muck have led to a stalemate and an empty manure patch. Last year, I finally found a source of rich, dark, crumbly green waste soil conditioner – it’s just a pity that it’s in the next county and a 40 minute round trip but I’ll take what I can get. We collected and distributed on to the allotment beds nearly 2 tonnes of the stuff. It’s surprising how much of it we needed. Another trip would have been ideal but with the green manure and some of our own compost looking like it’s ready to be used we should have enough muck, for now at least.

As winter fades there’s always a part of me that wonders if some of my plants will reappear. And when they do it is quite magical. It’s new plants I’m most worried about. I planted two hop plants at the allotment last year and did think the incessant rain might have seen them off. It’s hard to beat the feeling when you spot some shoots appearing from the ground or big fat buds swelling on a plant you were worried might be dead. I’m pleased to report the hops have survived as have quite a few plants I grew on the plot for the book which I completely forgot about. I like surprises like that. 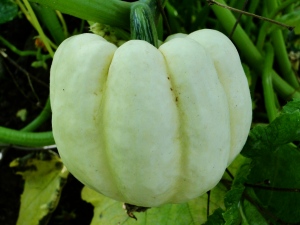 So September has come and it’s the final push for my finishing my book. The photographs have all been decided and have gone off to the printers to be set and the text has been ‘jiggled’ about to fit. I’m pretty sure jiggled isn’t the technical term and the whole process required much more skill and expertise than that word conjures up, so apologies to the designer if she’s reading this. But I’m still not particularly au fait with the intricacies of the publishing world so jiggling will have to do. The next couple of weeks involve editing the text and proofreading and just when I think I’m finished I remember that there’s an index to do and I mustn’t forget those all important ‘thank yous’.

I do feel slightly like this summer has passed me by. I have got photographic evidence though that I was outdoors and gardening for some of the time at least. Maybe it’s because despite July and August resembling summer for a change that really has been it – just 2 months of decent weather. It’s all too easy to forget we had the coldest spring for 100 years preceded by such a wet 2012. And now we’re heading towards autumn and I don’t feel ready for it. An Indian summer would be nice, not only to give me a chance to get all manner of jobs done that have fallen by the wayside this year but also to ripen my squashes.

Last year was the first time I had grown squashes. I tried a few onion or uchiki kuri squashes and grew them up a wigwam so they didn’t take up much space. They weren’t a great success bearing in mind the rain and cold that was summer 2012 but a few fruit did mature and it was enough to make me want to grow some more this year. Whilst the harvest may not have been huge, growing them vertically worked well. So I came up with a plan for this year’s squashes which involved some coppiced posts, Wellyman, a mallet and some hops.

The idea was to create a screen at one end of my plot, the end which sticks out into the rest of the allotment. Strict rules on the allotments mean we’re all a little limited with the type of structures we can erect and I didn’t want anything that would shade out any neighbouring plots. A green wall of foliage though would make life much easier over the coming months when I was having photographs taken, blocking out any water butts and blue carrot-growing bins.

I’ve always wanted my plot to look pretty. I like the make do and mend philosophy of allotmenteering but sometimes some plots can end up looking like a scrap yard with all manner of pipes, posts and tubing lying around. I wanted something that wasn’t going to break the bank but which looked rustic and natural at the same time. A bundle of coppiced posts from a local coppicer did the job. Tasked with the job Wellyman was in his element with his tape measure and mallet, working out the correct spacings for the posts. What resulted was a simple criss-cross pattern of posts pushed into the ground at an angle along the length of one of my beds. They were then lashed together with twine. At both ends of the screen I planted a hop. I chose the dwarf variety ‘Golden Tassels’ as it is a little less rampant than it’s taller growing cousins. ‘Golden Tassels’ can reach 3-4 metres, non-dwarf varieties can grow up to twice this. It’s also a pretty ornamental variety with lovely golden leaves. The idea wasn’t to harvest our own hops for beer making purposes but to cut down the long stems with their pretty green cones and dry them for decorating at home. The plan was for the hops to meet somewhere in the middle and then in between there would be squashes trailing up the posts too.

Of course, not everything went quite to plan. It turns out hops are prone to aphids and the cold spring meant I didn’t see my first ladybird until August. As a result one of the hop plants was a little stunted by the aphid infestation that took hold and never really recovered enough to reach its true potential. They’re perennial though so I’ll be prepared next year with my garlic spray at the ready. Despite this I’m happy with the overall effect. Hop number two grew as I had hoped, using the posts to climb upwards. The squash too are doing well. There was a point where I wondered if I was going to get anything from them. There were a lot of male flowers and no fruit to be seen. But I have nine fruits now swelling and ripening in the sun. They were meant to be a variety known as ‘Sweet Dumpling’ a winter squash with a creamy coloured skin and distinctive green stripes. Mine for some reason are lacking the green stripes. I could write a whole post about seeds not turning out to be what they should. Maybe I’ll do that next. I’m sure they’ll taste just as good though, whatever variety they are.