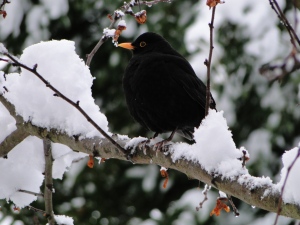 I love watching birds which visit the garden. The bird feeder and the bird table are all positioned in a way that means I can look on whilst I’m in the kitchen, washing up or sat at the table writing. I have been known to settle down to work in the kitchen with some binoculars next to me. It doesn’t do much for productivity levels though. The mild weather we’ve had this winter had resulted in very quiet bird feeders but the ice and snow of the last week has meant bird numbers in the garden have rocketed. There were seven starlings at one point crammed on to my tiny bird table and I’ve never seen so many chaffinches.

I’m a bit wary of feeding the birds and encouraging them into the garden when I know there are so many cats in the neighbourhood. Although my feeders are out of reach of bird snaffling moggies there are some birds that don’t like to feed from them and much prefer scrabbling around on the ground for seeds dropped from above. It’s always sad when I come across birds deposited by the house by said cats; they could at least take them back to their owners so they get the dubious pleasure of disposing of the feathered corpses, instead of me.

We don’t get a vast array of bird species visiting the garden which is disappointing. Typically we’ll see house sparrows, tits, blackbirds, starlings and robins. The bad winter of 2010 was pretty special with bramblings, blackcap, field fayre and redwings. The bird guide was perched on the kitchen window sill we had so many birds I’d never seen before. But this, it seems, was a one-off. I guess it’s because we don’t have the right plants and habitat the birds want. Neighbouring gardens prefer the ‘minimal’ look (just lawn), or plants such as cordylines for which I have developed an increasing dislike. They just seem so out of place in a rural Welsh garden and offer nothing to the local wildlife.

My quest has been, for several years now, to try to capture the visiting birds on camera but it has proved surprisingly difficult. The bird table is mounted on the side of the house and it’s possible to get photos of the birds through the window but ,generally, by the time I’ve got the camera they are gone. I’ll wait a while in the hope they’ll return but since I don’t get paid to watch birds I’ll eventually resign myself to getting on with the day. I know though that as soon as my back is turned the birds are ready, waiting to return just like the roller-skating pandas on the Kit-Kat advert.

I’ve tried to stealthily watch them from the shed with my camera primed. The shed is situated opposite their prime perching and feeding spot, my crab apple tree, and with the zoom I should be able to get some decent shots. That would be if they didn’t all vanish whilst I’m standing there in the freezing cold. I spent an hour in my shed last winter trying to get photos of goldfinches. A huge flock of them had been visiting regularly, that was until I entered the garden. I guess they didn’t want to get papped. It’s not me though, I’m convinced they know I have a camera  You see, I can go about by normal jobs, sorting out the recycling, depositing vegetable waste on to the compost heap and collecting wood from the log pile and they don’t bat an eyelid, feeding happily as I wander past. As soon as I’m there with the camera, WHOOSH and they’re gone, with just a lone feather slowly floating down in front of me. That’s the thanks I get for feeding them and running into the garden in the snow, in my dressing gown and wellies, flailing my arms around to scare off the prowling cats. You’d think the least they could do would be pose for the occasional shot. 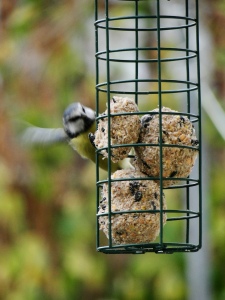 To quick for me

Even if a bird does linger long enough for me to take a photograph invariably it’s out of focus or the light is rubbish. I’ll admit that these are due to my lack of skills and aren’t the bird’s fault.

Outside the garden, when I’m out walking, I’m no more successful. I had the perfect opportunity to get a beautiful photograph of a robin on a snow covered branch yesterday but we’d just put the camera away in case we slipped on the icy path. Unzipping the bag and removing the camera from its case and then dropping the case on the floor, unsurprisingly, scared off the robin. Occasionally a bird will oblige. There was an incredibly fearless chaffinch that ate crushed up oatcakes from our table when we were on holiday on the Isle of Skye. The bribe of oatcakes meant it lingered long enough for photos. Then there was the Great skua or bonxie which was happy to pose. Although it stayed in the same spot for a good 30 minutes and I did wonder, at one point, whether it was glued to the rock or something. It’s just a pity that such an obliging bird wasn’t a little more photogenic. 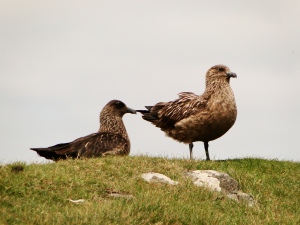 If you’d like to see how it should be done take a look at the Anxious Gardener’s blog. Not only am I envious that he got so close to a goldcrest but he even managed to capture it on camera.