I’ve become a little obsessed with wildflowers. I’m not sure when it happened exactly. I’ve always enjoyed seeing flowers in the wild but in the last year or so I’ve actually started seeking them out, making special trips in the hope I’ll come across a particular plant, as yet unseen. Our recent holiday to Kent and East Sussex gave me plenty of opportunities to indulge in my new passion.

The coastline of this stretch of the country is dominated by towering chalk cliffs and shingle beaches and the soil, underlying the countryside running down to the sea, is calcareous, created many millions of years ago by shells, sponges and sediment collecting on the sea bed to form a large chalk deposit. Where the land has not been fertilised for farming the soil depth is shallow and poor in nutrients and along the shore conditions are equally tough and yet, despite this, so many plants thrive. In fact, in some places it is because of this lack of soil fertility that there are so many native plants, as the stronger grasses which proliferate elsewhere can’t survive giving other species an opportunity to grow.

The nature reserves at Rye Harbour and Dungeness are great places for a spot of wildflower hunting. Wellyman was more interested in the marsh harriers and hobbies flying overhead. As he walked along with binoculars glued to his eyes I was ambling somewhat further behind, hunched over starting intently at the ground with wildflower guide in one hand. Some of these wildflowers are tiny, blink and you’ll miss them.

At first sight the landscape looks barren with mile upon mile of shingle but Dungeness Nature Reserve is actually home to over 600 plant species which is an incredible third of all plants found in the UK. 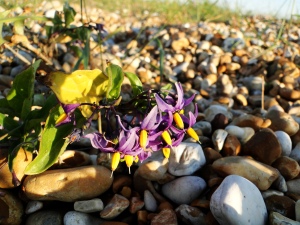 We spotted this plant poking out of the shingle and immediately recognised the distinctive flowers as being those from the nightshade family. I thought at the time it was a strange place for it to be growing though. After a little research it turns out it is actually a prostrate Bittersweet or Woody Nightshade (Solanum dulcamara var. marinum) that grows specifically on shingle beaches such as those at Dungeness. I’ve seen its hedgerow cousin growing up to several feet in amongst the hawthorn and blackthorn but here in harsher conditions it grows to no more than a foot tall, hunkering down out of the wind. I love the colour combination of its flowers but this is a plant to leave alone, like its relative the Deadly Nightshade, it is extremely toxic.

Parts of the shingle are covered in carpets of tiny white, star-like flowers that belong to the English Stonecrop. The flowers are reminiscent of alpines and the plants cling to the rocks never growing more the several centimetres tall. Low down and out of the drying winds they are able to conserve what little moisture they have.

There were drifts of Viper’s bugloss (Echium vulgare) everywhere. A member of the Borage family it has lovely purple flowers with pinky-red stamens. Several days earlier I had just planted out some Echium ‘Purple Bedder’ in my own garden, so to see the native version growing en masse was a real treat. A great plant for bees and butterflies as it is packed full of nectar, it apparently self sows with abandon and is obviously thriving along this stretch of coast and is one of the few plants to reach any sort of height, reaching over 2 foot.

A damselfly on the Nottingham Catchfly

This plant really caught my eye with its dangling flowers and petals that roll inwards during the day and then roll back at dusk, when it emits a strong perfume to attract moths. I had never seen it before but with a quick check of the guide discovered it was the brilliantly named Nottingham Catchfly. Named after Nottingham Castle where it was first discovered growing in the walls it no longer survives there. Rare nationally, it is thriving at sites such as Dungeness. 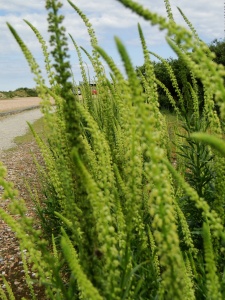 The tall spires of Weld

Another plant that wouldn’t look out of place in a garden border was Weld (Reseda luteola). A plant often found growing on wasteland, it favours calcareous soils. Its tall spires are similar to Veronicastrums and the acid greenness of its flowers combined so well with the purple flowers of Viper’s bugloss that it is often found growing alongside. I won’t be surprised if this isn’t a plant we don’t see used in the show gardens at Chelsea over the next couple of years. A biennial which flowers between June and August it is also know as Dyer’s Rocket and has been used for thousands of years to produce a yellow dye. The plant is like sunflowers in the way it tracks the sun during the day, even when it’s cloudy.

Yellow Horned Poppy on the shingle beach at Cuckmere

Even in June the wind whips through this landscape. It made walking and photography difficult so its the last place you’d expect to see a poppy. Normally poppies, although adapted to poor soil conditions, are easily damaged by heavy rain and wind but the Yellow Horned Poppy (Glaucium flavum) is made of sterner stuff. For the plant to ensure seed are produced the flower needs to stay around long enough for it to be pollinated and the flowers of this particular poppy can remain on the plant for a good couple of days. They still manage to look delicate and etheral but the leaves and stems of the plant are much more robust with thicker, waxy and hairy leaves designed to minimise water loss. The striking brightness of the yellow flowers contrasts beautifully with the grey-blue crinkly leaves. 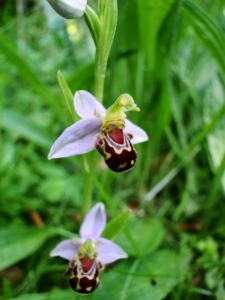 And finally, the star of the show, well for me anyway, was the completely unexpected encounter with a bee orchid. We had just completed a walk along the chalk cliffs of the Seven Sisters, returning to the visitor centre a little stiff, tired, needing the loo and desperate for a cup of tea there they were, 2 bee orchids. It was in such an incongruous place about 2 metres from the road, at the main entrance to the visitor centre, on a little bank of grass. They had a little sign next to to them but other than that I wonder how many people walk past them not realising what a little beauty is sitting there because we had that morning when we started the walk. It is from a genus of plants that mimic insects with its appearance and it can give off pheromones to attract the male of the insect species it mimics so that it is pollinated. However, the bee orchid is the only one in its genus to dispense with this and has now evolved to carry out self-pollination which may explain its ability to quickly colonise areas. I’ve wanted to see a bee orchid ever since I became aware of them and this chance meeting made my day.