Over the past few months I have become aware that not everyone knows what wellies are. Rubber boots that are designed to keep the feet dry, they are not an item of footwear that is particular to Britain but as they have been taken around the world other countries have come up with different names and this is where the word ‘wellies’ can get lost in translation. Apparently wellies are called galoshes, rain boots or rubber boots in America and Canada, gumboots or gummies in Australia, New Zealand and South Africa and are sometimes referred to as topboots in Ireland. So I thought I’d start off the New Year with a post about the history of the humble Wellington Boot.

Wellington boots are named after the Duke of Wellington. Famous for his defeat of Napoleon at the Battle of Waterloo in 1815, he then went on to be head of the British Army and became Prime Minister (1828-1830).  Wellington was nicknamed ‘The Beau’ because of his immaculate appearance and fashionable dress sense, the David Beckham of the day, perhaps.

Mens’ fashion was changing at the beginning of the 19th century with a move away from wearing breeches, an item of clothing that covered a man from the waist to the knees. The material was fastened around each leg with buttons or drawstrings but wasn’t particularly practical and as a result more men started to wear trousers. However, this meant the standard footwear of the day had to also change. Wellington decided to get his shoemaker to make him some boots that were practical for the battlefield but also stylish. The resulting boot was made from soft calfskin leather and tightly fitted the leg. 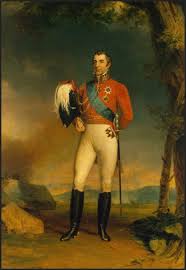 The Duke of Wellington in his boots

The boots became incredibly popular with fashion conscious men of the day, such as Beau Brummell, wanting to emulate the great soldier and the boots became known as ‘Wellington Boots’ in his honour.

By the 1850s rubber had been discovered and some manufacturers were experimenting with this new material. In 1853, Hiram Hutchinson moved back to his native France after working with Charles Goodyear, the inventor of the vulcanisation of rubber. Hutchinson set up ‘A l’Aigle’ to manufacture rubber boots. At the same time, Henry Lee Norris established the North British Rubber Company in Edinburgh, Scotland which made a wide range of products including rubber boots. But it wasn’t until the First World War that the rubber wellington boot as we know it became popular when the War Office instructed the North British Rubber Company to produce hard wearing boots that could cope with the wet conditions of trench warfare. After the war wellingtons or wellies became popular with ordinary people as a wet weather boot and the North British Rubber Company eventually became Hunter Boot Ltd now manufacturing the famous Hunters wellies.

There is now a myriad of wellies available with every colour and pattern  imaginable, from short ankle boots to wellies with a heel!  In fact, although wellies are still seen as practical footwear, they have once again become fashionable. I wonder what the Duke would think of leopard patterned, wedge heeled rubber boots that carry his name today.