Protea on Charles Albone’s Time in Between Garden © Ian Curley

I spent yesterday immersed in plants, from orchids and exotic proteas to classic English roses and native elm trees. There were gardens created by the best designers and plantspeople from Britain and beyond. One enormous marquee – the Great Pavilion – a temple to plant passion with nurseries from across the country. There were sculptures, greenhouses and all manner of garden-related bit and bobs. This was press day at RHS Chelsea Flower Show and it really doesn’t get much better than this for someone who loves plants.

On a cold, grey morning in south-west London someone had clearly forgotten to mention to the weather that it was meant to be spring and, as if on cue, the spots of rain started to fall just as we entered the showground at 8am. Press Day is the day when suits, summery frocks and fabulous hats abound. Exhibitors, designers and sponsors want to look their best for the press calls, photos and, later in the day, the Queen and other members of the Royal Family. I had huge admiration for those ladies who had looked out of the window that morning and had disregarded the weather forecasts and thought ‘I’m wearing those heels and floaty dress regardless’. Then there were the rest of us in waterproofs huddled under umbrellas trying desperately to stay warm. Later on that morning Anneka Rice would enter the Great Pavilion looking like it was a summer’s day outside despite the fact that a deluge of rain was pounding the roof. I’ve always been somewhat in awe of women who manage to look glamorous in situations when I look bedraggled and windswept. I’m sure Anneka must have had lots of those heat pads strategically stitched into her dress, as I was wishing I’d worn a second pair of socks and some thermals at that point. I think she must win the award for smile of the day – like the ray of sunshine we were hoping would come from the sky at some point.

Despite the weather the plants shone and looking back now through the photos you really can’t tell that it felt more like March than May. A testament to all the hard work that goes into creating these gardens and the nurturing of plants over the previous months and, of course, Wellyman’s lovely photos. 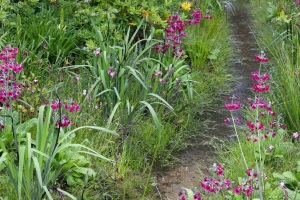 I was giddy with excitement at the prospect of seeing Dan Pearson’s Chatsworth inspired garden and Jo Thompson’s design with its natural swimming pool. Seriously, I’m like a child before Christmas in the period before Chelsea. These two gardens, in particular, had caught my eye because they looked so different from the more typical Chelsea show garden. I often find some of the show gardens to be a little too similar – very masculine, blocky and sometimes a bit too slick for me, very suited to their sponsors and potential clients in the City but no spaces I can warm to. The space alongside Main Avenue is divide up into rectangles which need to be viewed from two sides, both elements which create restrictions on the designer from the start. It could also be why some of the more successful and unusual gardens in recent years have been those off Main Avenue where they have a slightly different footprint.

Dan Pearson’s garden inhabits the triangular-shaped spot at the end of Main Avenue. Viewed from all sides, unlike the other gardens, this can prove tricky, but Dan had requested this spot specifically. Dan Pearson is one of the UK’s most successful designers, but it has been over a decade since he last designed a garden at the show. His return has been much-anticipated by fans of his naturalistic planting and take on garden design. His garden this year for Laurent Perrier has been based around the landscape and gardens of Chatsworth House in Derbyshire. Enormous boulders chosen from the estate perched, some of them seemingly precariously, in the space. Around these stones the garden trod the boundary between wild and cultivated. Water meandered through the garden inspired by the trout stream at Chatsworth. The attention to detail was incredible. Honestly I’ve never seen anything like it. My eye was drawn initially to a patch of grasses with red campions and leaf litter mixed in amongst it. Initial thoughts were this had to have been there before the build started and that it was perhaps a piece of the ground poking through from the pre-Chelsea build; it looked just like a patch of woodland glade or hedgerow verge. But, as I took in the rest of the garden, it became clear this had been created. And it really was fabulous. It wasn’t a wow garden in an obvious luscious planting, stunning hard landscaping way. For me, both Jo Thompson’s and Matthew Wilson’s gardens wowed me straight away. Dan’s garden however was much more of a slow burner. I just wanted to keep looking at all of the details then I’d spot something else, another plant like a delightful white ragged robin, or the way the plants mingled together so naturally. This is what made it so different from so many other gardens. From what I have read about Dan and from interviews I have seen with him this very much seemed like a garden which reflected its designer; quiet, thoughtful, unshowy. The judges loved it too, awarding it a gold medal and Best in Show. 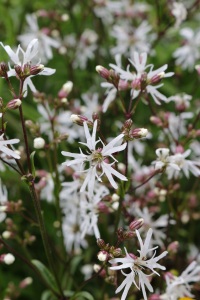 Jo Thompson’s Writer’s Retreat Garden for M&G Investments takes its inspiration from Vita Sackvile-West’s writing room at Sissinghurst in Kent. Jo and her all-female planting team have created a stunning, feminine garden with voluptuous plantings of roses and species I recognised from my cut flower patch, such as ammi, ridolfia and Gypsophila ‘Covent Garden’. These mingle around the base of an impressive multi-stemmed Betula nigra with fabulously textural, peeling bark – the pinky-apricot tones cleverly reflected in the spires of foxglove ‘Sutton’s Apricot’. 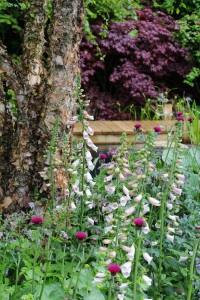 A richly planted backdrop of trees and shrubs creates a lush boundary and the natural swimming pool looked inviting. I think Jo’s garden is a real stunner and feel slightly disappointed for her and her team that the garden received silver-gilt and not gold, particularly as other gardens which didn’t appeal to me so much won gold.

Matthew Wilson’s garden for the Royal Bank of Canada is inspired by Beth Chatto and his experience of previously managing the gardens at RHS Hyde Hall in Essex, where rainfall levels are similar to those in Beirut. Designed around the idea of a garden which uses water sustainably, the zero-irrigation ‘dry garden’ is packed with beautiful planting. Verbascum ‘Merlin’ was the first to catch my eye, followed by the shrubby Leptospermum scoparium ‘Red Damask’.

Clumps of striking Californian poppies contrasted with the purple flower spikes of Salvia nemorosa ‘Mainacht’ I started to hanker after my own gravel garden. The dramatic 150-year old macro-bonsai olive tree is spectacular and the steamed ash benches with their sinuous lines crafted by Cornish designer Tom Raffield must surely win the award for the most stunning seats at Chelsea. One of my top three gardens this year.

You have to be prepared for every eventuality when it comes to the British weather. Swirling winds, low light levels in the Great Pavilion and lashing rain in the morning made photography and note taking tricky particularly as I was often juggling a tripod, umbrella, and notepad. My propped up umbrella nearly took out a couple of plants on a few occasions. I had visions of me being escorted from the showground for taking out an exhibit. Pollen and the tiny barbed seed pods of London plane trees planted around the periphery of the showground whipped up by the wind left most of sneezing, coughing and scratching our eyes, rather ironically like a plant-based biological weapon had been unleashed on Chelsea. We both did passable impressions of a cat coughing up a fur ball on the journey home.

Despite all of this the plants came out on top and I’ve come home brimming with ideas. Mid-May can be a tricky time for gardeners frustrated by the weather and exhausted by the demands of a spring garden. Chelsea is just the fillip this gardener needed.