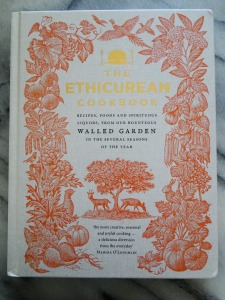 I’m passionate about local and seasonal food. If I can’t grow it myself then I’ll try to source it from a farmers’ market or at least look for British food at the supermarket, When it comes to eating out the provenance of the food is equally important. Years ago we went out with a group of friends to a restaurant which, as we were to discover, was a very loose description of the place. Chosen by another member of the group it wasn’t somewhere we would have ordinarily picked but we persevered. Unfortunately it was one of those eating establishments that helped to give British food such a dreadful reputation. One of our friends on the table muttered under their breath, as he attempted to cut the slab of insipid looking meat on his plate, that the chicken hadn’t had a happy life. It ended up being one of the most soul-destroying meals I think I’ve ever had.

In complete contrast is the Ethicurean. A restaurant just south of Bristol it’s based in the Victorian glasshouse at the heart of a productive walled garden. The team of young chefs behind the restaurant are passionate about local, seasonal food and they have built up an impressive reputation in a short space of time for tasty, inspiring food.

I first heard about the Ethicurean about a year ago and have been lucky to eat there a few times. Initially, the location in a walled garden was probably as much of a draw as the food. I have a bit of a thing for walled gardens, there’s something so magical about them. The location is impressive with views from the restaurant out across the south sloping garden and the Somerset countryside beyond. The food didn’t disappoint either, being inventive but not in a snail porridge sort of way and, most importantly, it was delicious. And now the foursome, Iain, Jack, Matthew and Paula have created their first cookbook.

First impressions on receiving the book were good. I loved the design. It’s unusual to find a recipe book without a picture of food or some celebrity chef adorning the front cover. Immediately this said to me that this book might be something different. The photography by Jason Ingram is beautiful. Images not just of the food but also of the walled garden, the team and traditions such as the wassail all give the book a real sense of place. There’s a feeling that the team really do have an affinity with the landscape, nature, the seasons and the walled garden and that it hasn’t all been conjured up by a TV producer.

Seasonality is crucial to the chefs making them ethicureans and not just epicureans. Gardener Mark grows fruit, vegetables and herbs and the chefs seek out other ingredients from the growing number of small-scale producers in the local area, whether it’s goat meat, salt-marsh lamb, water buffalo or local cheeses. They also forage and make use of the abundant game in the countryside. Reflecting this seasonality the book takes us through a year at the walled garden. I loved this element. The descriptions of the frost clothing the vegetable beds and apple trees, the first signs of spring, the abundance of summer to the fruits and fungi of autumn. In the days before air-freight, cooking was inextricably linked with growing and the seasons and the team at the Ethicurean are trying to rekindle these connections.

The food looks and sounds delicious and I can vouch for the goat meatball recipe which I have sampled at the restaurant. I would say this is a book for more adventurous/confident cooks though. Some recipes include techniques such as smoking and there are quite a lot of ingredients that won’t be so easily available to everyone or will at least need some tracking down. Having said that the nettle and squash soups, the milk stout and chocolate steamed pudding and the Eccles cakes all look easy to make.

It’s impressive to discover that the chefs are self-taught and they’re generous with their hints and tips throughout the book. They extol the virtues of pressure cookers (I’ve always been nervous of them since my mum’s exploded!) to pickling nasturtium seeds to produce something akin to capers. And it’s not just food that’s covered. The Ethicureans love their drink, from the cider and apple juice made from fruit from the garden and pressed on-site to their tempting cocktails. You get the feeling these guys know how to party.

I’ve already earmarked a patch of newly emerging nettles for some soup this weekend and Wellyman is eyeing up the apple, pear, cardamon and chocolate cake. For me the only real disappointment about the book was discovering that they already have a flower gardener. Growing flowers in the Barley Wood walled garden with all that tasty food so close-by, now that would be a dream job.

Thanks to Sarah at Ebury Press for a copy of the book.

The Ethicurean is out on May 16th.