I can’t get enough of astrantias. They must be one of the most photogenic plants, certainly in my own garden. They are the sort of plant that draws you in, makes you look at it in closer detail. It is not a bold or brassy plant like some, to really appreciate astrantias take a closer look. It’s only then that you realise what you thought was one flower is actually a flowerhead made up of tiny multiple flowers held on stalks. These umbels are suspended above papery bracts that initially looked like the petals, creating the impression of one larger flower. It’s no wonder that one of the common names for astrantias is hattie’s pincushion, not sure where Hattie comes from but pincushion is just the perfect description for the flower heads. 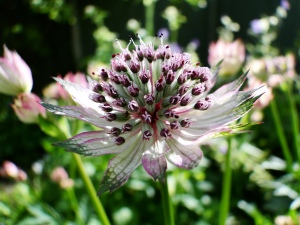 Astrantias are herbaceous perennials introduced to Britain back in the 1500s they are native to Europe, particularly the Balkans area, where they favour moist soil and dappled shade and can often be found in woodlands. Fully hardy, their leaves first start to appear in March. Glossy green, palmate leaves with serrated edges that are similar to those of hellebores they make an interesting feature in the border. Astrantias are also one of the longest flowering of all the herbaceous perennials with the first flowers appearing in late May and the plant still blooming in October. It’s worth removing faded blooms to prolong the season and to control self seeding. If the conditions are right astrantias will happily pop up all over your borders and it’s the best way to propagate plants as they don’t like root disturbance and can take a while to recover from division. Sow fresh seed onto the surface of a compost filled seed tray, cover with grit and keep moist. Some may germinate quickly but if not leave the seeds over winter and in spring new plants should emerge.

I love the stained glass affect on the petals

It’s believed that the name astrantia derives either from the Greek aster referring to the plant’s starry shaped flowerheads or from the Latin magistrantia meaning masterwort. Astrantias are also known as Great Masterwort or, much more obscurely, melancholy gentleman. 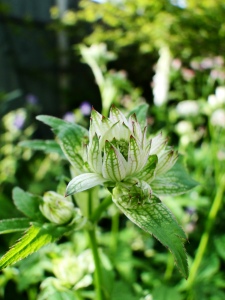 I have 3 varieties; Astrantia major with white and green bracts, Astrantia major var. rosea with its pink tinged bracts and ‘Ruby Wedding’, a beautiful crimson red colour. The red varieties need a little bit more sun for the true colour to show through and seem to be able to cope with slightly drier soils but the others need moist conditions and dappled shade replicating their native environment. Not only are astrantias such a great addition to a garden, they make great cut flowers, lasting well in water and allowing you to appreciate the detail of their flowers up close.