If you had to say what was the biggest trend over the last 10 years I think most people would agree it has been the incredible growth in the popularity of growing your own. Sales of vegetable seeds now outnumber those of flower seeds and the last 2 years or so has seen an increasing interest in growing fruit. Waiting lists for allotments are up to 30 years in parts of London and the demand for land to grow produce has inspired many an ingenious project such as Hugh Fearnley- Whittingstall’s Landshare, which puts people with land in touch with those who want some and the Incredible Edible project in Todmorden, Lancashire.

Much of this has been attributed to a desire to know where our food has come from. Interestingly however, a survey commissioned by Which Magazine last year showed that the top reason for growing your own was not because of the health benefits but because of the increase in food prices people thought growing their own would save them money.

I say this is interesting because it has always been of some debate in the Welly household whether you do actually save money growing your own. This has come to the fore again as I contemplate growing carrots for the coming season. Simple you might think, seed aren’t that expensive, just buy some, sow them and then several months later you’ll have carrots. But as all you fellow carrot growers will know it’s not quite that simple. I tried some last year at the allotment and they were decimated by carrot fly.

Keeping out the carrot fly with wood and enviromesh constructions

Fellow plot holders went to extreme lengths to keep the flies out with wooden contraptions constructed and covered in fine mesh but they admitted it would have been much cheaper just to buy them from the supermarket. The other problem is the soil isn’t fine enough for carrots with a high proportion of clay in the soil on my plot. So that was that, at the end of last season I had decided not to bother with them. But the addiction to grow things won’t go away. So I’ve now decided to grow them in pots at home, away from the allotment carrot flies and in compost mixed with some sand to give them the right conditions. I have suitable pots but there is the purchase of compost, which isn’t cheap and some sand. So is it really worth it?

We don’t weigh our produce so it is difficult to know how much, if anything we actually save. You need to factor in your allotment rent and any expenditure, for instance any fertilisers, equipment and compost. Even if you can produce enough compost for your plot you still need to buy it to sow the seeds. There are some plants that are better to grow if saving money is a key, what I call high end produce. Soft fruit is one of the worst offenders for chemical residues and buying organic is expensive but even after purchasing raspberry canes last spring and not expecting much of a crop in the first year we were certainly up by the end of the autumn. This was partly due to discovering the variety ‘Polka’ which was especially high yielding even in it’s first year.

Anything that crops over a long period and that keeps producing are a cost effective use of space. Courgettes, for example will happily overwhelm you over a good 2 – 3 months. This year I’m growing broad beans based on it being difficult to get organically produced ones and that they were expensive last year. I plan to weigh this crop, although I’ll probably forget, to see how we do on cost.

One crop we’re definitely not growing is sweetcorn. We’ve tried it twice and  it has succumbed to our cool, dull summers. I know it’s meant to taste sublime when picked and cooked immediately but weather is the one element I can’t do anything about.

So here are my tips for getting the most from your plot: 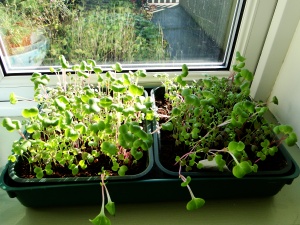 I posted a couple of weeks ago about growing microgreens for the first time. Well I just thought I would post an update on how they’ve done.

Despite the decreasing light levels I was surprised to see they germinated quickly and a week after sowing all the seeds had germinated. They grew quickly and less than 2 weeks after sowing I cut my first microgreens. You can cut them when they are about 5cms tall. I have found that the shorter days combined with a lot of dull weather has meant the seedlings have become very leggy. This isn’t really a problem though because I’m not growing them on to become proper plants.

So what do they taste like? Well they have a surprisingly strong taste. I didn’t expect things so small to pack such a punch. The radish in particular had a really good radish flavour and a good amount of heat and a kick that you would expect if eating a fully grown radish. It was quite strange. I used them just sprinkled on a salad.

Would I recommend trying them? Well I think its worth giving them a go, even if it’s just because you are able to grow something at this time of year. If you like salad cress then I think growing these are better because you are getting more variety of flavour and they all look a little different which looks more interesting. It does seem a little strange cutting these plants off before they get to make proper size plants but at this time of year they wouldn’t really grow much more anyway. So as a winter project they are ideal. At any other time of the year I think it would be a bit of a waste of seed though. You don’t need a lot because they have a lot of flavour which is just as well really if you wanted to feed a lot of people you would need quite a bit of space. I have 2 half seed trays on my kitchen window sill which will provide us with about 5-6 servings or should I say sprinkles.

I think they would be nice to do if you had a dinner party or maybe people round for Christmas and used them sprinkled over a starter or canapes.

I plan to try some more, maybe even mixing my own blends. I definitely like the idea of beetroot and herbs such as purple basil and coriander.

If anyone else gives them a go I would love to hear how you get on and what plants you’ve tried.

Last week was definitely a week for wellies. We had so much rain when I went up to the plot to pick up a leek the paths were squelching under my feet. It’s in weather like this that I’m so glad I put in the paths between my beds on the plot. No need to walk on sodden ground to pick my leeks and kale and because I haven’t damaged the structure of the soil I won’t need to rotivate the soil next Spring.

With little to do on the plot and plants still flowering in the garden so the post-frost tidy-up is still to come, I decided on a new little project. I love trying new ideas or ways of growing plants. This autumn I sowed some cut and come again lettuce, rocket and red pak choi in troughs and put them in my coldframe at the front of the house.

Salad troughs in my cold frame

They’ve worked really well, providing me with a good supply of salad leaves through the autumn and being just by the front door I can pop out on a morning and pick a handful to make up Wellyman’s packed lunch. I’m not sure how much longer I can keep them going though. Damp conditions and low light levels are the perfect conditions for botyrtis, a fungal disease that rots leafy tissue like salad leaves.

So I thought I’d give some microgreens a try.  Microgreens are simply leafy edible plants such as salad leaves, brassicas and herbs that are picked when they are about 5cms high. They are more of a garnish really, a bit like a multicoloured, multiflavoured cress. Microgreens became really popular a couple of years ago, especially in fancy restaurants. I have spotted some bags of them in my local supermarket and in delis but they are expensive to buy, so I’m not sure whether they have taken off or not.

I spotted an already blended packet of seeds at the garden centre at the weekend so I thought I’d give them a try and if they work and we like them I’ll make up my own blend. You can use all sorts of seeds – chard, beetroot, cabbage, broccoli, radish, coriander and basil to mention just a few. The packet does say you shouldn’t sow them between November and February but the RHS website says this is the perfect time of year for microgreens. So bowing to the RHS, and what I hope is it’s superior knowledge, I went ahead and sowed them.

I filled 2 seed trays with peat-free compost, sowed the seed liberally on the surface and then lightly covered with compost. Finally, I stood the trays in some water and then let them drain before placing on my kitchen windowsill. I’m hoping there will be enough warmth and light for them to germinate and then once they have produced their seed leaves and then their first true leaves you can snip them off and eat them. Although the cuttings are small they have a really intense flavour. The RHS suggest you can even grow them like you do cress, in a tray with some wet kitchen roll. Unlike cut and come again lettuce though, once you have picked these they won’t continue to grow. So to have a good supply it is best to sow every 2 weeks. Hopefully in a couple of weeks I will be able to report back and say whether microgreens are a worthy winter project.

Well … maybe disaster is a bit of an exaggeration. The sweetcorn on our plot have been a victim of this cool, dull summer. The photo shows how the kernels haven’t swollen properly, some haven’t swollen at all. After reading several books, looking on the internet and some advice from my friends at ukveggardeners.com I discovered it was due to poor pollination. 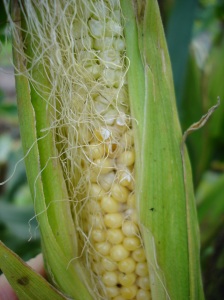 I had planted the sweetcorn in a block and tapped the male flowers when they had opened, all to aid pollination but it seems the weather plays its part as well. Sweetcorn love warmth and sunshine (don’t we all) and haven’t appreciated summer 2011.

Maybe its a waste of time trying to grow sweetcorn in Britain with our track record of summer weather. It’s the same with tomatoes, after 3 years of blighted tomatoes we gave up trying to grow them. It was soul-destroying after nurturing our plants for months for us to get no crop from them.

I know Wellyman will want to grow sweetcorn again but I’m wondering whether we shouldn’t try some cabbages. They don’t taste as good on the barbecue though!!!