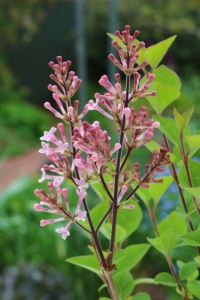 Well maybe that’s going a bit far but a bit of a garden revamp has certainly reignited my interest in my own back garden. This time last year both Wellyman and I were excited about the prospect of moving house but when we decided to put that on hold I pretty much lost my gardening mojo. I had entered into gardening limbo. As the summer progressed it got worse. I was still growing for work but inside my heart wasn’t in it. I spent a lot of time wracking my brain as to how to marry the situation with my need for a change. I didn’t want to spend much money and didn’t have the inclination to rip out everything I had planted over the last 8 years and start again. The idea of creating a cutting garden had been at the back of my mind for a while. A space packed with shrubs, bulbs and herbaceous perennials which would supplement the annuals from the cut flower patch. A place where everything could be picked for a vase. I’d always planned for it to be in another garden, somewhere a little bigger, where I could start from scratch. I hummed and hawed over whether it would be worth trying it here and if I actually had the space to do it. After 7 years of being in place the raised beds needed a few repairs anyway and the pond no longer worked where it was. So a few weekends ago we bit the bullet. Wellyman cleverly rejigged the raised bed configuration. By removing a few oak boards we incorporated a path into the beds and reusing the boards meant we didn’t need to spend any money.

The next job was to move the pond. I say pond, it’s more of a puddle to be honest, one of those preformed liners. It’s initial spot was fine, but then the greenhouse came along which made access to the pond tricky. Cleaning out pond weed required Wellyman (his longer arms were needed) to perform a yoga-like balancing act. Being tucked away meant not only did it not get cleaned as frequently as it should have but we also didn’t get to appreciate it. We did consider removing it completely, to put the space to better use, but we thought we’d at least try it out in its new location and then decide. Wellyman decanted two-thirds of the water into trugs and we gingerly lifted it out of the ground. Then two little eyes appeared. There was a frog staring back at us looking a little perturbed by the disturbance and us rudely waking him up on a Sunday morning. Well, what could we do? The decision was made for us, we could hardly make him/her homeless, so the pond is to stay, albeit in a new, more accessible spot.

Plants were divided and some went to the compost heap making way for others which had been sitting in pots waiting for a new home. Out have come grasses, a helenium, and some sedums, in has gone a small, repeat flowering lilac, a Viburnum opulus and some hesperantha. 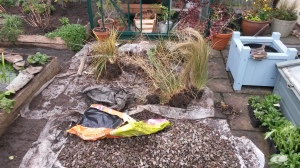 With time soil had made its way on to the gravel paths, so much so that I’ve had as many plants sprouting in the paths as in the raised beds this summer. As everything was getting an overhaul the gravel was moved on to plastic sheets whilst the weed membrane was swept. We made a fantastic muddy mess by washing the gravel to remove any soil and plant material before putting it all back on top of the membrane.

Working outside at this time of year brings its problems. For a couple of weeks after the clocks change, the shorter days take me by surprise. You come back after a break for lunch and realise there’s so much still to do but that daylight is already slipping away. I seem to have spent quite a bit of time in recent weeks scrabbling around in the dark with a torch perched precariously whilst bulb planting, tidying out the greenhouse or potting up plants. I think a head torch might be making it to the top of my Christmas list this year.

The raised beds in spring

The other problem is mud. It’s impossible to do anything in the garden without creating a mess and the damp weather means nothing dries out. You start this kind of work with the best intentions taking wellies off every time you come indoors but when the phone rings and you’re trying to do the welly removal dance at speed or you’ve forgotten something for the umpteenth time it’s all becomes too much of a faff. The wellies remain on and the floor starts to resemble the mud splattered patio. Then there’s the clothes. It was hard to tell if there were gloves under the hand-shaped clumps of mud which Wellyman left by the back door.

I didn’t think a patio caked in mud was what the magazine editor and photographer would be looking for to accompany shots of spring bulb planting. I’d scrubbed and scrubbed with a brush but it didn’t seem to make the flagstones look any cleaner. Day after day of thick fog and moisture saturating every surface didn’t help. I was contemplating hiring a pressure washer at one point, until I woke one morning to the sound of rain pelting the roof and more importantly the patio. Every cloud has a silver lining.

You can’t call what we did a garden redesign but I think it’s enough to fire my imagination for another couple of years. It’ll give me the opportunity to grow new plants, to experiment in the garden and in the vase, and to excite me as to how elements of the garden will change through the seasons. And, perhaps most importantly for now, there’ll be lots of lists and scribblings this winter as I scour the plant and seed catalogues.

Have you got any plans, grand or small, for your garden this autumn/winter?