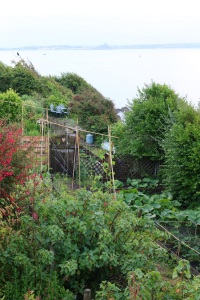 Cornwall’s mild climate means a whole host of plants from around the world can grow happily there. Most visitors are drawn to the National Trust gardens, Eden and Heligan but if you look beyond these there are other places where you can get a plant fix too.

Driving along the coast road from Newlyn to Mousehole I spotted the tops of bamboo canes clearly arranged to provide support for runner beans and a glimpse of some allotments. Later that evening we came back to take a closer look at the plots perched on the cliff with views out towards St Michael’s Mount. It must be incredible to grow here, with the sound of the sea below, although I’m sure the salt-laden winds pose problems and I’d be a little worried about coastal erosion. Further up the coast at Praa Sands this winter’s storms had taken their toll, worryingly so for the homeowners whose gardens were creeping ever closer to the edge. Even so I loved these plots and their quirky scarecrows created from all manner of salvaged finds.

It’s unusual to find houses which come with a garden in the tiny fishing villages which dot the Cornish coast. That might explain the extraordinary waiting time to take for an allotment in this area, which according to the Penzance Town Council website ranges between 5 and 9 years. And, rather than devote more land to allotments the council have decided to divide any plots which become available into two in the hope this will tackle the waiting list. When a patch of land does come with a house it’s clearly much appreciated. This row of gardens, in Mousehole, were squeezed into a strip of land above the sea and separated from their houses by a quiet road. As gardens go they are tiny and exposed to whatever the weather throws at them, but it was heart-warming to see how they were clearly precious to their owners.

On our final day we decided to slowly make our way home rather than heading straight back. Our first stop was Kestle Barton. We’d picked up a leaflet for the place the previous day in St Ives and thought it might be worth a visit. Billed as a rural arts centre it was the garden designed by James Alexander Sinclair which persuaded us to divert there. This isn’t the sort of place which you are just passing by. A combination of directions on the leaflet and Google Maps directed us down ever narrower country lanes until we eventually found ourselves at the end of the road and our destination. When Karen Townshend, ex-wife of The Who’s Pete Townshend, came across these old farm buildings dating back to the 19th century they had been untouched by modern agriculture and were crumbling into a state of ruin. Now they have been stunningly and sympathetically restored to provide an exhibition space and self-catering accommodation.

From the barn you walk out into a south-facing garden with bold drifts of herbaceous flowers and grasses. The scent from the mass planting of the lavender was divine and the sight of the vast meadow teeming with bees and butterflies was a delight. I’ve since discovered that the surrounding farm land is managed with the environment in mind. Tree planting projects, a commercial walnut nuttery, an orchard of Cornish apple, cherry and plum varieties and organic principles all form part of a plan to show how farming can adapt to climate change. Small field boundaries are being restored and native hedgerows planted. I love the ethos and if the wildlife in the meadow was anything to go by the environmental principles are working. As an arts centre though I’m not so sure. The space here was perhaps too small – just one barn –  and the handful of images weren’t very well presented. Maybe on another day with another exhibition it might have been different. As for the garden, well I think it could be the real attraction here. James Alexander Sinclair’s design and plants work so well in the setting and I loved what was there. It was what wasn’t there that was the problem – I didn’t understand why there were so many patches of bare soil. It looked like some plants had died or that the garden hadn’t yet filled out. It seems that the garden was planted in 2010 so maybe it just needs a bit longer to become established. Kestle Barton could be such a fantastic place, I really hope it can just find that extra oomph to take it there.

Our next stop was The Potager Garden about 20 minutes from Falmouth, tucked away in amongst the creeks of the Helford River. I’d spotted this place a few years ago in a weekend newspaper but we had never got round to visiting. It was Wellyman who remembered that we weren’t too far away and it would be perfect for a spot of lunch. An abandoned nursery, glasshouses and grounds have been lovingly restored to provide an idyllic setting in which to eat, drink and relax. There were hammocks in shady corners, table tennis, and packs of cards and dominoes dotted about. You know those sorts of places where you feel like they can’t wait to get rid of you, well this wasn’t one of them – they actually want you to linger here. And what a place to while away a few hours. The plants which were once nursery stock have become established plants. Many were growing through their pots into the ground when the site was rediscovered after ten years of neglect. The idea has been to create gardens which are both attractive and productive and they’ve succeeded. I knew the food would be good but it was a real surprise that the gardens were so beautiful too.

The Potager Garden Cafe and its gardens

I’d love to hear about your own off the beaten track garden discoveries.

17 thoughts on “Off the Beaten Track – Cornish Gardens”