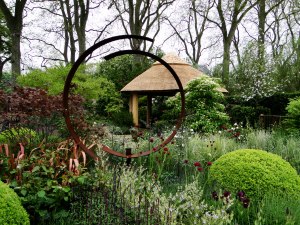 It tends to be the show gardens that attract the most attention at Chelsea. Large sponsorship budgets and top garden designers combine with the intention of creating the wow factor. Show gardens can take a year to 18 months in the planning and 3 weeks to build. Then, on the first Monday of Chelsea the designers step back as the world’s press enter Main Avenue and the criticism and plaudits begin. A hush descends on a garden as the RHS judges enter and the designer looks on nervously. Gardens are awarded medals – gold, silver-gilt, silver and bronze on how well the garden meets the brief that was initially submitted, overall impressions and the quality of plants and the build. There is no quota for each medal so, technically, every garden could win a gold medal. Designs are also judged purely on their own merit and not compared to other gardens in the show. The results of the judging are then announced early on Tuesday morning. 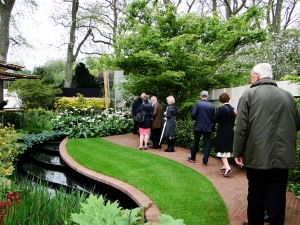 Judging on the East Village Garden

Of course, everyone has their own opinion and it was interesting to be there on press day as the judging was taking place and hear the thoughts and predictions as to which gardens people liked the most. If the comments on twitter were anything to go by I wasn’t the only one to be surprised that 10 out of the 15 show gardens won gold. For me it wasn’t that gardens were badly designed or unattractive but some of them just didn’t do it for me. Whilst the judges might assess the gardens individually I would say that most people including myself tend to compare each garden.

The show gardens are quite an odd concept. Appreciating a garden fully only really happens when you can immerse yourself in it, wander through it, touch and smell the plants. Show gardens however provide a two-dimensional experience. Judges and some members of the media can get access to the show gardens but the rest of us have to view from a distance. Of course it would never be feasible to allow the numbers that visit these flower shows full access to the gardens but it might be one explanation as to why the opinions of the judges and the public so often differ. Then there is creating a garden that will look perfect for the third week in May. For most of us the challenge is a garden that will look good throughout the year. Plants need to be placed much closer together than you would ever do in reality to create that feeling of abundance and impact. And what about the practicalities of such a designs in the real world. I looked at the beautiful polished golden York stone path on Roger Platts’ garden having muddy footprints wiped off it before some filming was about to take place. It’s honeyed tones were stunning but it did strike me as being the horticultural equivalent of the white-painted lounge and a toddler with a chocolate bar.

Criticisms of the show gardens often focus on the lack of originality. Occasionally there’ll be a Diarmuid Gavin design which stands out or there was the plasticine garden created by James May. These gardens gain a huge amount of publicity which I get the feeling annoys the ‘serious’ designers. Whether you think such gardens should be allowed into Chelsea or not they do offer something different. I’m not suggesting the gardening equivalent of a theme park but a little more variety would be nice. Perhaps it isn’t so simple though. A show garden comes with constraints and limitations before the actual design process has even started. The size and shape of each garden is restricted by the needs of the show-ground access to the site, and services such as underground cables and pipes. Then there’s the need to allow visitors to see as much of the gardens as possible without creating bottlenecks or possible damage to the gardens.

Often there is a story behind a design. Sometimes this can be quite obvious, for instance Nigel Dunnett’s rooftop garden with the idea of showing how with increasing pressure on urban land we should be looking at the potential of our roof space for planting and creating new habitats. For me Jinny Blom’s garden was harder to ‘understand’. I loved elements of the planting but was left a bit cold by the areas of hard landscaping and the stone structure at the back. It was only later that evening when I saw her explaining a bit about the garden on TV that the design made more sense. Inspired by the landscape of Lesotho she had wanted to capture the rocky terrain and buildings that reminded her of the country. Unfortunately this rather passed me by on the day. 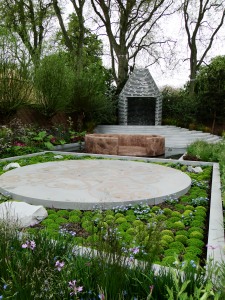 It didn’t take long on Monday for me to spot the theme of naturalistic planting which was a feature in so many designs. It has been popular at Chelsea for several years now and is the kind of planting that really appeals to me. I love grasses, poppies and umbel flowers and use that kind of planting in my own garden but you can have too much of a good thing. Just as Dianthus carthusianorum was everywhere last year at Hampton Court, it is the turn of cow parsley to be the ubiquitous plant of Chelsea 2013. This was probably one of the reasons why Robert Myers’ garden disappointed me, by the time I got to it I’d had my fill of wafty, floaty planting.

Another trend in recent years has been the use of greenery and minimalist planting. It was visible again this year although I’m not sure it was so intentional this time around with the weather playing its part. The concept of minimalist planting is an anathema to me. For me the dilemma is there are so many plants I want to grow and just not enough space. There is something a little strange about having a garden and then choosing to restrict the plants and colours in it. 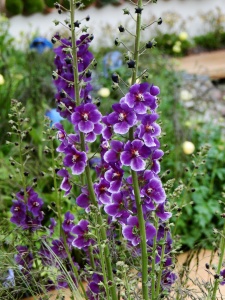 One of the reasons for such differing opinions between judges, designers and the public is that we tend to want different things. Judges are looking for adherence to the brief, designers the opportunity to express themselves and the public simply want something they like to look at, something they would want in their own garden. This is perhaps why Chris Beardshaw’s garden and his vibrant planting proved so popular with those I spoke to on Monday.

In many ways, as visitors and viewers on TV, we need to suspend our disbelief and see the show gardens for what they are, a showcase. Big budget sponsors and top class designers are always going to want to create high-end gardens which most of us struggle to relate to but would we want to go to Chelsea and find something we could see in our own village or town? Probably not. Chelsea is about polished floors and walls made from copper, frame-less glass cubes and sunken seating areas. Every year there will be gardens that divide opinion and a garden that the public loves. But enough with the floaty planting, for one year at least.

23 thoughts on “A Garden for Show”