Writing my blog has shown me how much my mood is affected by the weather. It’s a fairly obvious observation that we feel happier when the sun shines and glum when it’s grey and wet but somehow seeing how I write over the course of the year, my choice of subject matter and how these reflect the weather outside has emphasised just how much it impacts on me. I had the pleasure of meeting the lovely Sejal again on Saturday night. A fellow attendee at Lia and Juliet’s supper club in Bristol she also reads my blog and it was interesting that my preoccupation with the weather and, in particular the amount of rain we get in Wales had been noted. Of course, my last post will have done nothing to change the perception that I am obsessed by the weather. So I thought I should try to redress the balance a little and write about the plus side to all the rain we’ve had in the last week or so. And I promise that’s the last time I mention the ‘r’ word, in THIS post at least.

The garden has become lush with leafy, green growth at last. I love this time of year when the plants fill out. The crab apple in full blossom, followed by its leafy canopy and the acer in the far corner of my garden screen the fence, neighbours’ out-buildings and houses. The garden starts to feel enclosed once again and I no longer feel like I’m on display to the whole world as I potter about. There’s a point where the change in the garden is quite sudden and it always takes me by surprise. One day I’ll be stood, looking out of the kitchen window and think ‘wow when did that all happen?’ 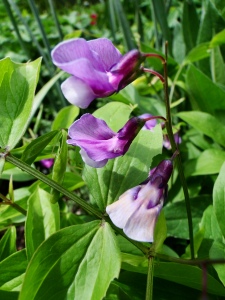 A wander around brings a few squeals of excitement as plants I had completely forgotten about have reappeared like my Lathyrus vernus for instance. I first saw this at Painswick Rococo Garden in Gloucestershire flowering in late March and thought it was a lovely little plant. Last year I tracked one down but when it didn’t seem to be poking through the soil I feared I might have lost it. But fear not, it must have just been biding its time through the cold spring and it has emerged with its delicate purply-pink flowers.

There’s also been the discovery of a small patch of red campion by the side of my path. I’ll admit I do have a tendency to forget which plants I’ve bought and what I have put where. I do envy people who have an encyclopaedic knowledge of their plants, especially when their garden stretches to acres but it isn’t something I’m blessed with. I’m convinced, however that I have never purchased a campion plant so its appearance is an intriguing but welcome addition to the shady border.

There’s reacquainting myself with favourite plants. The pure white hearts of my white dicentra which would normally be going over by now dangle above the foliage of geraniums. The white and purple forms of viola cornuta which edge my paths and self-sown aquliegias that have popped up all over the place. I’m also eagerly anticipating the new plants added to my back border. I finally got around to removing some of the astrantia that had taken over but wanted to keep a soft, feeling, almost hedgerow-like and so have planted some foxgloves and wild carrot in there. They are still a while off flowering but should look good by mid-June.

The espalier apple is looking good and has timed its blossom opening perfectly with the crab apple so that pollination should be ensured, just as long as the bees can brave the cold. There are fewer forget-me-nots than I would like. Even though they self seed I would normally sow some extras in June or July for the following spring but I forgot last year. So I’m making a note to remind me when I come to sow my biennials in a month or so.

Geranium phaeum ‘Lily Lovell’ is just coming into flower. I love its rich purple colour which stands out so much more now that we have painted the fence. I love the contrast between the purple flowers and the bluey-green background. It doesn’t have a long flowering season but is out just long enough to grab any available light before the canopy of the crab apple casts its shade on this corner. It has been a bit on the chilly side recently to linger in the garden but if I shuffle the plants around in the greenhouse I can linger in there with a cup of tea and appreciate my spring garden at last.