On the vegetable front the past few weeks have been mostly about peas and beans. Not only have I been sowing mangetout, ‘Sweet Horizon’, a maincrop pea, ‘Hurst Greenshaft’ and broad beans, ‘Masterpiece Green Longpod’ but we’ve been feasting on peas shoots for a while now. I absolutely love broad beans but it wasn’t always that way. My memory of broad beans was those dreadful grey, dry, woolly things I was fed in the eighties. *shudders* The broad beans we eat now bear no resemblance, pick them when young and double pod them and the vivid green captures early summer on the plot. It’s difficult to buy organic broad beans, and even non-organic are sooooo expensive. For me, they are a must on our plot.

Until last year I had never thought it was worth growing my own peas. Frozen peas are nutritious and easy to come by. I did grow some sugar snaps though, and occasionally some of them swelled so much that we needed to discard the outer casing and eat the peas inside. Eaten straight away, and raw in salads they were so incredibly sweet and tasty. So, last year actual peas were introduced to the plot and despite the weather were a real success. Both sets of peas and the broad beans are all planted out now.

Making a bid for freedom – my forced rhubarb

Everything is crazily busy at the moment, hence my absence from blogging for a while. I’m either at the computer writing or in the greenhouse. My apologies if comments don’t go up for a while and I don’t get back to you or I don’t make it over to your blog. I still read all your comments and really appreciate you popping by. I would really love it if there were a few extra hours in each day. I did, however manage to get out for a bit of a walk on Saturday. Pentwyn Farm near Monmouth is an idyllic spot even if the cold wind had returned. It’s an area of unimproved grassland owned by Gwent Wildlife Trust.  A habitat that’s quite rare now, the fields are managed to protect the wide variety of wild flowers that grow there. We tend to come up here in early summer to see the orchids. It was strange to wander around through the fields in late April and there be so little to see. If you didn’t know what was hiding away in the soil waiting to appear you’d be forgiven for wondering why Pentwyn Farm is so important. This was the first time we’d used the new nature trail the wildlife trust have created. It took us down the valley and out past a field of Hebridean sheep which are being used to manage the grassland. There was also the slightly disconcerting sight of a couple of alpacas. It’s not that unusual now to see alpacas in the British countryside, brought in to protect newborn lambs from foxes, or kept for their wool. I still find it funny to see them, a touch of the Andes in Wales.

It may be May in a few days time but the landscape feels like it is only very reluctantly emerging into spring. Trees are coming to life but it was hard to imagine the fields in a month or so’s time, covered in orchids, eyebright, and yellow rattle. Then, just as we were leaving, we came across a field of cowslips. It’s been a great year for primroses, the cooler conditions meaning their flowering season has been long but we hadn’t come across any cowslips until yesterday. Unlike its cousin the primrose, cowslips need more sunshine and an open site in order to thrive. Once an abundant plant it played a significant role in the celebration of spring’s arrival but intensive agriculture and spraying of herbicides lead to a dramatic decline in their numbers, along with so many of our wild flowers. My own garden is teeming with primroses but I have only one cowslip plant which my mum gave me last year. The first thing I did when we got back from the walk was to go and see if it was flowering yet. And there they were, a couple of stems with delicate yellow trumpet-like flowers. 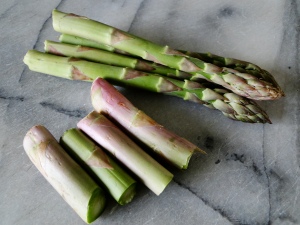 To complete the spring theme we came across the first bundle of asparagus spears in a local deli. I was surprised to see them to be honest. I had thought the cold spring would have delayed the harvest but it appears not. It was impossible to resist them even if the price tag was a little steep. The season is so short that they are such a treat to have over the coming weeks. Herefordshire and Worcestershire are proud of their asparagus growing, there’s a festival to celebrate the green spears with food, music and even inflatable asparagus. When it comes to cooking asparagus I prefer simplicity. I do occasionally put it in quiches or frittatas, but steamed with a few shavings of parmesan or with goats cheese and parma ham are my favourites. When it comes to snapping off the woodier base of a spear, my asparagus tip (sorry, dreadful pun, I know) is don’t throw the ends away. If you make your own vegetable stock they make a great addition giving it a lovely sweet flavour. I put the ends in a freezer bag, collecting them over the course of the asparagus season and keep them in the freezer. When you’re making your stock just get a few out and put in the simmering water along with your other veg.

36 thoughts on “Legumes, Cowslips and an Asparagus Tip”