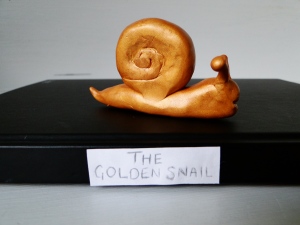 And so to the second part of my awards for 2012. Today I’m offering up a Golden Snail for those things that let the side down this year.

The first award has to go to the weather. I know Britain isn’t exactly known for its great weather but really this year was a shocker. And it started off so well. Basking in sunshine in March it wasn’t long before there were the rumbles of hosepipe bans and drought warnings. Water butts were flying out of garden centres as gardeners prepared for a summer of water shortages. Someone was interviewed from a water company and said we’d need it to rain incessantly for most of the summer to fill up the depleted reservoirs and aquifers. The words be careful what you wish for do spring to mind. There’s no denying we needed rain but not in the quantities we’ve ended up with. Ground saturated after summer now can’t cope with the winter rain. It wasn’t just the rain though. Summer never really got going. Sunshine levels were low and we didn’t have much heat to speak of. All of this meant it was a pretty shocking year for gardeners. We can only hope that 2013 is an improvement but that wouldn’t be hard.

Slugs, to be honest, would feature in any list of downsides to gardening but with all of the aforesaid rain slug numbers this year exploded. Pity the slugs didn’t. It’s fair to say they had a field day chomping their way through not just the usual Hostas and lettuce but, in my own garden, climbing all the way up plants to eat the flowers of Heleniums and Monardas. Now this really was rubbing it in my face. What worries me is, if all those slugs laid eggs that are waiting in the soil to emerge next spring, will we be in for even more slugs next year.

I wasn’t sure choosing a plant purely because I liked its name was the best idea and Ezetha’s krombek blauwschokker proved me to be right. A purple mangetout pea it was, well, pants. It wasn’t particularly prolific, the pods needed to be eaten very small so they weren’t tough and if you did miss picking the pods the resulting peas were pretty flavourless. It’s flowers were pretty but then I wasn’t growing it for them. I already had two beds of flowers, what I really wanted was tasty peas. So it gets a big thumbs down. In future, I think I’ll be looking for flavour recommendations instead. 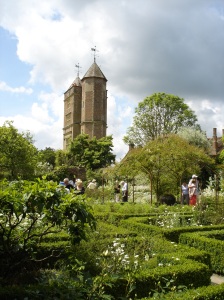 The White Garden at Sissinghurst

Derek Jarman’s garden may have won the Golden Wellies award but Sissinghurst unfortunately gets a Golden Snail. Maybe it was never going to be able to live up to the reputation that preceded it but the visit just left me feeling rather flat. In many ways it’s a victim of its popularity. Coach loads of tourists pull up every day, in fact numbers are already restricted during the busy summer months and yet it still felt too busy. I like to be able to find a quiet spot in the gardens I visit but this really wasn’t possible and it did give it the air of somewhere that was just being crossed off the sightseeing list. Coaches disgorge their cargo every day but a comment I overheard did make me wonder how many of them would have chosen to go if it wasn’t just part of their itinerary. Wellyman and I were gobsmacked to hear someone say ‘I don’t really like gardens with flowers’. Really? Well I’m guessing you’re not going to enjoy today then. I don’t deny the design of the gardens and the setting are beautiful but the atmosphere can matter just as much and sadly this didn’t feel right at Sissinghurst.

I feel a Golden Snail must go to the TV producers out there who could bring us great gardening TV but aren’t. Considering gardening is the most popular hobby why is there such a dearth of programmes about it. One half hour programme once a week in the form of Gardener’s World seems rather paltry to me. There was the Love Your Garden programme on ITV and the Flower Pot Gang on the BBC but these were makeover programmes rather than garden programmes. They served a purpose and I’m sure appealed to many and some really deserving people had gardens created for them that will make a difference to their lives but they aren’t what I’m looking for in the schedules. What about some botany programmes, features about gardens abroad and how gardening is perceived in other countries, allotments, arboretums, plant collectors both historical and modern? Why has nobody thought about  programmes devoted to a particular plant in a similar vein to Anna Pavord’s book The Tulip . There is so much potential out there and I do find it very frustrating that gardening seems to be seen as just about digging and sowing.

The Blueberries I never got to eat

The birds which stripped my blueberry bushes before I had a chance to net them are awarded a Golden Snail. If they ate more snails rather than blueberries we might have a more harmonious relationship.

And finally, my last Golden Snail of the year goes to those suggesting that tools can no longer be stored at my allotment site because of Health and Safety. As well as all the usual stuff I take up to the plot with me – secateurs, trug, gloves, twine, bucket for flowers, bags for produce and sometimes fleece or netting, the idea that I might now have to somehow cart up there a spade, fork, rake and hoe doesn’t thrill me. All this and no car. I think I’ve got an interesting year ahead of me as a committee has been set up to liaise with the council to iron out problems with the management of the allotments and I volunteered to be on the committee. I don’t like the politics that invariably results from these sorts of meetings so I’m not sure how it’ll go. We needed 4 people to represent the allotment holders and the response was underwhelming to say the least. For me the allotment is about a place to escape to, my main concern is that it becomes somewhere that is less about relaxation and more about a cause of stress. Lets just hope I’m not giving the allotment a Golden Snail this time next year.