It’s strange to become attached to clothes and footwear but I think most of us, at some point, have had a feeling of sentimentality to a favourite piece of clothing. Wellyman had a long, wool overcoat that he loved despite it being known as the ‘flasher coat’, not, I hasten to add because of any weird predilection for availing passers-by with more than they wanted to see. It was a name given to the coat by a friend of his because it did look a little like the sort of coat someone up to no good would wear. It had been his grandad’s when he was in his early twenties and Wellyman had rediscovered it in the loft one day.

The problem came, of course, when the coat, which was by now over 60 years old, started to look a little worn. Holes were appearing but still I couldn’t persuade him to replace it. The death knell for the coat though was mould. Even he had to admit it was finally time for a new coat. Finding a replacement that feels as good and fits as well is the challenge though and it probably makes us cling onto our beloved clothes that little bit longer than we should.

When I discovered my wellies leaked a few weeks ago I thought finding new ones would be a frustrating experience. I’d grown stupidly quite attached to my little green boots. The easiest solution would have been to simply replace them with another pair of Hunters. These ones had lasted me 7 years and had been worn pretty much every day. They had coped well with baking sunshine, freezing weather and snow and, of course, copious amounts of rain. From the plot and garden to the beach and the hills around our home they had certainly been well used, to the extent there was hardly any grip left on the soles. So I was more than happy to replace like for like but then, just as Wellyman was about to order a pair for my birthday, we had a tip off that Hunters were no longer made in Scotland and that they had changed the manufacturing process. After trawling the internet it did appear this was the case and that, as a result, the quality had suffered. Whether this is true or not I don’t know but there were certainly a lot of people complaining about their recently purchased wellies.

Not prepared to take the risk the quest for new wellies began. Twitter and blog friends were generous with their suggestions and advice. There are so many wellies to choose from now, it’s quite incredible. There’s tartan or leopard patterned wellies, neoprene-lined super warm wellies and gorgeous but expensive leather ones which require a phone call to the bank manager before purchase. The choice felt a little overwhelming. There is only so much you can glean from the internet anyway. I much prefer to try before I buy, especially with clothes or shoes. Whilst the internet is great for many things the impact on our high streets saddens me.

However, I needn’t have worried. My welly search meant I discovered a local country store that I hadn’t known existed, with friendly, helpful staff. Their selection didn’t included a vast array of patterns or colours; green or black was the extent of the palette and there wasn’t a wedge welly in sight. This was a place for serious wellies. 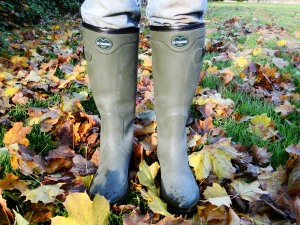 And so it’s au revoir to my Hunters (I’m going to keep them for when I do outdoor painting jobs) and bonjour to my Le Chameaus. They came highly recommended, are a great fit for my narrow feet and super comfy. Most importantly though they don’t leak and have amazing grips on them, so no more unintentional acrobatic routines on the muddy paths at the allotment.