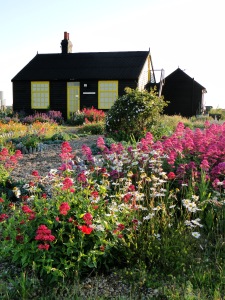 Prospect Cottage and its garden on the shingle spit of Dungeness in Kent could not have been more of a contrast to the previous three gardens we had visited on our holiday. Pashley Manor, Great Dixter and Sissinghurst all artfully conjured up what most of us would think of as true English gardens; roses in abundance, herbaceous borders, topiary and the use of formal lines to contrast with the softness of the planting, all surrounding beautiful old buildings. My own taste in garden style is exactly that of these three gardens, probably more the wildness of Christpher Lloyd’s planting at Great Dixter but on a much, much smaller scale and as much as I loved visiting them you can have too much of a good thing. Prospect Cottage provided the refreshing, stimulating change that was needed.

Driftwood sculptures and planting in shingle

The garden surrounding Prospect Cottage was created by the film director Derek Jarman. He moved to the little tarred black fisherman’s cottage with it’s distinctive yellow window frames in the mid 1980s and created a garden in what seems an impossible place. He died in 1994 but nearly 20 years later his garden still attracts people to Dungeness’s unusual and bleak landscape.

The shingle spit of Dungeness has been created over thousands of years. Now a nature reserve it juts out into the English Channel. This flat and exposed piece of land is starkly different to the green rolling hills and farmland only several miles away. Bleak, and seemingly barren, it is hard to image anything or anyone would want to make this their home. In summer the sun beats down with little in the way of shade to provide respite and with nothing between it and the sea the winds rip through here with a regularity that gives the place a weather beaten look. The only other place we’ve felt more windswept was the Isles of Scilly. With such a flat landscape the sky feels huge and it takes on a different presence. Clouds scud across at a pace and you get a real feeling of being close to the elements. This scene is dominated by the looming buildings of the nuclear power station. A blot on the landscape to many it certainly adds to a sense of otherworldliness that makes Dungeness feel so unique. And yet, despite all of this, or perhaps because of it, this strange place is not desolate and lifeless, far from it.

There are over 100 houses at Dungeness. Some were created over 100 years ago from railway carriages, others are wooden huts like Prospect Cottage. It was to here that Jarman retreated when he discovered he was HIV positive. Around the cottage, in the shingle, he started to create a garden. All around Dungeness there are plants, growing in this seemingly inhospitable place they thrive, adapted to the salt-laden winds and the calcareous soil. Species such as the horned poppy, sea kale, woody nightshade and valerian appear through the shingle. These little plants hunkered down and battered by the elements inspired Derek Jarman. He added to the natives already growing encouraging more of them and experimenting with other plants to see if they too could cope with the conditions. He discovered that Californian poppies, lavender and santolina were all happy there. Collecting driftwood, bits of metal and rope and large pebbles that washed up on the shore he created sculptures and focal points which gave the garden some height. He also created patterns in the shingle such as concentric circles, a little like in Japanese gardens, where they rake gravel to symbolise water. 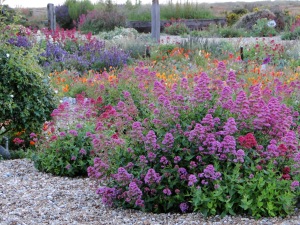 He used flint stones to mark out planting areas giving this part of Dungeness a sense of definition and distinctness. Perhaps one of the most striking features to the visitor’s eye is the lack of boundaries. There are no fences, hedges or walls separating the cottages and the houses themselves have a feeling of being unintended, almost like they blew in on the wind but I love how Jarman used the bits and pieces he found lying around to define the space around him.

Prospect Cottage is now privately owned and the garden is not actually open to the public but it is possible to view it from the road right in front where you can get a perfectly good view of the garden. Tempting as it was to wander through the garden and around to the back with no boundaries there to stop you, we didn’t, remaining by the road and respecting the owners privacy. Apparently there used to be a group of bonsai sloe trees several inches tall but each spreading about a foot which would fruit and flower. I don’t know whether they are still there or not but the gardens seem to have changed little from when Jarman was still alive so I have little reason to doubt there isn’t still a magical little bonsai forest on Dungeness.

We visited one evening with the sun setting and parked up. A hare, only the second time we’d seen one, bounded past and marsh harriers and hobbies flew over head. It’s strange really that the garden we visited for free and only briefly, that was tiny in comparison to the others on the tour and that had such a limited number of plants is perhaps the garden I will remember most fondly. The oasis in the shingle.

There is a fascinating book about the garden at Prospect Cottage if you would like to read more about Derek Jarman and his creation.