With friends over to stay and the possibility of a dry, even sunny, day on Bank Holiday Monday we decided on a trip to Hampton Court. Not, however, Hampton Court of King Henry VIII and William and Mary fame but rather Hampton Court Castle in Herefordshire. It isn’t on the same scale of grandeur as the royal place but I think it is a real, hidden gem. 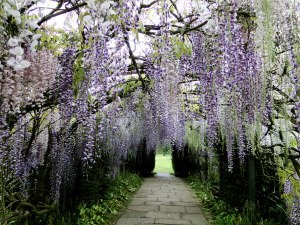 Situated in beautiful countryside between Leominster and Hereford the 15th century castle is set in 1000 acres of parkland with 15 acres of stunning gardens. Elements of the garden go back to the Victorian period when the house was owned by John Arkwright, grandson of industrialist and inventor Richard Arkwright but much of the garden was created by Hampton Court’s American owner in the 1990s. The original Victorian brick walls enclose an organic kitchen garden, which supplies the restaurant, and several ‘garden rooms’ with herbaceous borders, a rose garden and a Dutch garden. One of the larger sections is divided by small canals with island pavilions. With high yew hedges, pleached trees and paths leading off in different directions there is a mysterious feel which reminded me of The Secret Garden children’s book. One of the most stunning features has to be the 150 year old wisteria tunnel. Its old, gnarled trunks and branches form a covered walkway dripping with wisteria blooms, their scent hanging in the air. 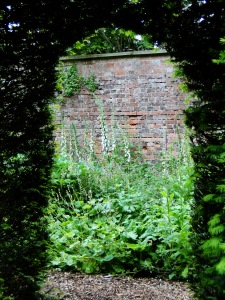 I loved the rose garden. So often rose gardens can be disappointing affairs, with a few straggly specimens, struggling to survive and devoid of any other planting, as if the name rose garden had been taken rather too literally. Here, at Hampton Court, the roses were full of vigour, blooming profusely and they had also been planted with a variety of other herbaceous plants. There were alliums, some with flowers as big as a head, geraniums, honesty, lavender and centaurea, all in soft pastel colours. But best of all, the roses had all been chosen for their scent. There can’t be many things more disappointing, in the gardening world, than a rose without a scent.

Some of the herbaceous borders were planted with a purple and yellow theme; tall yellow and purple bearded irises, yellow aquilegias, alliums and yellow roses smelling of citrus.

The kitchen garden is functional and attractive. Espaliered fruit trees line the paths and act as dividers. A woven birch tunnel will provide support for ornamental gourds as the summer progresses and woven willow has been used to create raised planters.

Of course, not everyone is quite as enamoured by gardens as I am but the younger members of the group were kept entertained by the yew tree maze and the gothic central tower which affords views out across the garden and parkland. There was also the underground tunnel which led to a sunken garden via a small waterfall. Here there were gunnera, heucheras and other shady, woodland and moisture loving plants surrounding a pond.

After lunch in the Joseph Paxton designed orangery we walked through the parkland and down to the River Lugg. A path had been created by the riverbank through the cow parsley and wildflowers. It was teeming with bugs and beasties, beautiful demoiselles and damelsflies flitting about and metallic coloured beetles.

Bought several years ago, after the death of the American owner there were worries that these beautiful gardens would be closed to the public but I was heartened to see that quite the opposite seems to be the case. In fact, the gardens are looking better than on any of our previous visits, with a gardener on hand to show visitors around and a programme of events throughout the season. Oh, and I nearly forgot to mention the small plant nursery, which has a good selection of plants that you can see throughout the gardens. A small purchase was made of a Chrysanthemum with unusual ball-shaped flowers that is great for cut flowers . . . well it would have been rude not to!

Herefordshire itself is a beautiful place to visit. It has beautiful scenery, great food producers, offers some excellent walking and canoeing and because it is a little off the beaten track you are rarely troubled by traffic jams and too many people. The icing on the cake for a garden lovers like myself is a place like Hampton Court.