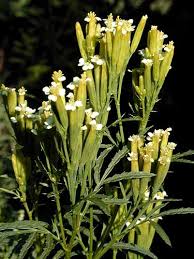 Gardeners everywhere understand how annoying and frustrating perennial weeds can be. For years people have turned to chemicals to solve the problem but as fewer chemicals are now available and more of us want to grow organically could growing a particular plant, Tagetes minuta, be the answer.

Annual weeds maybe the bain of a gardener’s life, especially in spring when the increasing light levels and warm soil mean they appear all over the place. However, a spot of regular hoeing is all that is needed to keep on top of these weeds.

Perennial weeds are another matter. Some, such as daisies and plantain are easily removed but the discovery of some perennial weeds can strike terror into the heart of a gardener. There is a sinking feeling when you come across ground elder, bindweed and, heaven forbid, Japanese knotweed. Most of us would probably turn to glyphosate, a systemic weedkiller, which means it travels through the leaves, into the main body of the plant, where it is transported through to the roots killing the whole plant. Although glyphosate is deemed to be a fairly safe chemical because it is broken down quickly in the soil, there is talk that it may be banned by Europe in the coming years and I think most of us would ultimately prefer not to use any chemicals.

So could this be where Tagetes minuta comes into it’s own. It’s common name, which I love is ‘stinking roger’ because of the smell given off by it’s leaves. A native of South America it is a half hardy annual which can grow up to 2 metres. It certainly isn’t a looker with tiny nondescript flowers but it’s what is going on in the soil that is important. Tagetes minuta exudes chemicals from its roots which repel weeds such as couch grass, bindweed and ground elder. This is a biological phenomenon called allelopathy, when one organism produces one or more chemicals which influence the growth and ultimately the survival of other organisms.

Tagetes’ ability to cleanse the soil was discovered by a bulb grower in Holland in the 1940s. After the bulb harvest and before he planted his next crop he grew some African marigolds (Tagetes erecta) to sell as cut flowers. He started to notice that land where the marigolds had been growing no longer had problems with eelworms, tiny worms that burrow into bulbs and tubers. Over the next couple of years he continued to clear strips and grow these marigolds, curing his soil of ‘root rot’. He told the local agricultural research team who studied the marigolds and produced a report which became known as ‘The Tagetes Effect’. The Henry Doubleday Research Association (HDRA), now known as Garden Organic, then took up the baton and started their own research to see if there were other members of the Tagetes family that could combat problems such as potato cyst eelworm. Their quest led them to South America where the first potatoes had been grown by pre-Inca civilisations. Land was limited with crops being grown on terraces. There wasn’t the space to rotate their crops and yet they had no eelworms in the soil and this was down to Tagetes minuta which had sacred status amongst these early people.

Working with Swansea University the Henry Doubleday Research Association discovered the 5 important compounds in Tagetes minuta and then a member of HDRA grew some in the hope it would also cure a wireworm problem. It didn’t, but it did clear the soil of ground elder. It seems that the same chemical compounds that deter pests in the soil also interfere with the life cycle of some particularly invasive weeds. Sarah Raven has recently used it to clear a bed of ground elder.

A note of caution however, Tagetes minuta itself is actually considered a weed in over 35 countries, including the USA. It is only a problem though if allowed to set seed which is unlikely if grown in Britain because it flowers late, in September/October. It could be used as a green manure, grown in an area with pests or weed problems and then cut down in autumn with the bushy green foliage being added to the compost heap. Chemicals released from the plant when touched can cause dermatitis so it is advised to wear gloves when handling.

Many of us have used members of the Tagetes family as companion plants for tomatoes to repel aphids but it’s fascinating to discover that plants themselves could hold the key for future ways of controlling pests and diseases.

18 thoughts on “The Weed Killing Plant”