My kind of lawn mowing

We’re quite attached to our lawns here in Britain. Much time is devoted to mowing, raking, edging, and feeding to create the perfect swathe of green. Last weekend was the first dry and warmish weekend of the year and I could hear the distant hum of lawnmowers around the village. For many, a garden wouldn’t be a garden without a patch of turf and the weekly mow is part of garden routine, but not us. When we moved here one of the first things we did was dig up the grass in the front and back gardens.

I don’t deny that the smell of cut grass is a powerful scent that can transport me to a warm summer’s day, I love lying in a park surrounded by green and I’ve visited some beautiful back gardens where the lawn is an integral part of the design. Friends with pets and children see their lawns as a necessity and I’ve seen extraordinary levels of care lavished on patches of grass. We once lived opposite a lady whose front lawn can’t have been more than 2 metres square but that lawn was primped and preened as if it was a prize-winning poodle. There would be a sprinkler installed during the summer months and it was so green it looked like astroturf. Her gardener, who must have been in his 60s, gardened wearing nothing but a pair of tiny shorts and little plimsolls and had the sort of leathery skin cultivated from a life of sun-worshiping. It was an intriguing site to say the least. 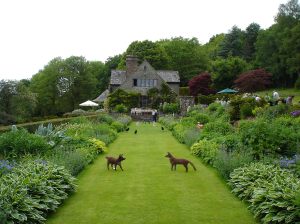 The Lawn at High Glanau Manor, Monmouthshire (the foxes are statues)

Our gardens, front and back are both small. There was no path to the back shed, so you had to walk across the grass to get to it. Well after our first winter here, where it seemed to never stop raining and I had to collect the wood from the shed via the grass you can imagine what state it was in, not to mention our kitchen floor. A proper path was needed but there was so little space left that putting in a lawn didn’t seem worth it and in the front garden there was nothing but grass and a hedge. After 8 years of living with other people’s gardens I wanted plants and as many as I could squeeze into the space. I’d always loved cottage gardens and their exuberance, stuffed with flowers tumbling over paths. A swathe of lawn seemed like such a waste.

The lawn in my front garden being removed

I love how Carol klein the tv presenter has no grass in her garden even though hers is considerably bigger than mine, at over a third of an acre. She’s a real plantswoman and has large raised beds and border running through her garden instead.

The front garden with no grass but lots of plants

There is another reason why the lawns had to go, we both hated mowing them. Up until moving here we had lived in a variety of rented places and all except the flat you couldn’t swing a cat in, had gardens with lawns in varying states of neglect. Most were weed infested, not just the occasional daisy here and there but more dandelions and plantain than grass. Some had drainage problems and the resulting moss and the last house had a lawn that was so undulating with bumps and dips that it would have made for an interesting mini golf course. Of course, every time I mowed it I would scalp the bumps and not be able to mow the dips, which meant that even after an hour of mowing it still looked dreadful. The back garden at this house had a sloping lawn and so when mowing I was always worried the momentum of the mower would take me with it plunging me towards the patio. Then there was the sinking feeling when returning from holiday, knowing that the grass would now be knee deep and would be a chore waiting to be done.

Unusually, Wellyman has a real aversion to lawn mowing. It seems to be one of those chores that men really love, maybe because it involves machinery, I not sure but it’s not for Wellyman. During the months of June and July when I would be suffering from hayfever Wellyman would take over the mowing responsibility but he was clearly not happy with lots of huffing and puffing and muttering. And finally, there was the storage of the mower, which took up the best part of our garden shed. So the grass in our new house never really stood a chance.

It has been really liberating. One less thing to do before the holiday and no knee-high grass to wade through on our return. No faffing around with cables that won’t reach, no discovering you’ve mowed through the cat mess only when it’s too late and no grass clippings deposited everywhere especially when it has been a bit damp and they stick to everything. But best of all I’ve been able to grow so many more plants than I ever would if my garden had a lawn.

14 thoughts on “The Green, Green Grass”