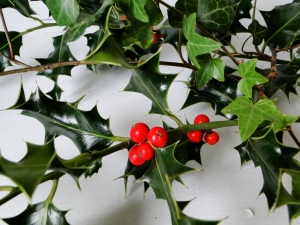 The Holly and the Ivy

Even with the mild Autumn we’ve had my garden is still entering its winter slumber. It is this time of year when evergreen plants such as holly and ivy come into their own and not only do we appreciate them in the garden but we also use them to decorate our homes.

For thousands of years humans have used plants to celebrate the changing of the seasons. Plants that were important to our ancestors have rich histories of folklore and superstition. Evergreen plants which live through the winter were believed to possess special properties and were held in high regard.

Holly and ivy have been linked with winter celebrations for thousands of years and as a result a mass of folklore has built up around the 2 plants.

It was believed that prickly holly represented the male and smooth holly the female. It was believed that holly had the power to ward off evil spirits which is why it was placed around doors and windows. The prickles would snag evil spirits before they had a chance to enter the home. It was also believed that holly could protect from lightning which is why holly was often planted near buildings. According to the website treesforlife.org.uk it has since been discovered that the spikes of holly do actually act as miniature lightning conductors.

It was believed that holly had an affinity with control, especially of horses and holly wood was used to make whips for coachmen.

According to Richard Mabey in Flora Britannica there was a widespread belief that misfortune would befall anyone who cut down an entire holly tree. He says this belief continued into the latter part of the 20th century. Apparently, in 1861, the Duke of Argyll had a planned new road rerouted to avoid having to cut down an old holly tree.(treesforlife.org.uk)

Some believed it was unlucky to bring holly into the house before Christmas Eve. It was also thought that picking on Christmas Day would enhance its medicinal properties of treating gout and rheumatism.

The story that intrigued me most though is that of ‘Holming Day’ on 26th December, otherwise known as St. Stephen’s Day. Apparently in Wales it was the practice for young men to hit young women on their bare arms with holly branches until they bled. Ouch!!!! In some areas it was legs that were beaten and in other places it was the last person out of bed on that day. I can’t find any explanation for this but the practice continued until the end of the 19th century.

Ivy has been important since Greek and Roman times as a symbol of fertility and love. According to Richard Mabey goblets were often made from ivy wood in the belief that it would neutralise bad or poisoned wines. Ivy had strong associations with the Roman god Bacchus, the god of wine and drinking. This association is thought to explain why ivy was not held in such high regard as holly. Whilst popular with pagans, it was not brought into churches because of its link with drinking. Although, in Victorian times in came back into favour because of its beautifully, decorative foliage and came to symbolise marriage and fidelity.

I’d love to hear if anyone knows any other folklore surrounding the holly and the ivy.

11 thoughts on “The Holly and The Ivy”