I was inspired to grow my own cut flowers this year by the gardener, florist and TV presenter Sarah Raven. I’ve never really liked a lot of the flowers available from florists and the arrangements feel too stylised, I much prefer a more natural look and flowers that are in season. I know the red rose is the symbol of love but I would much prefer a bunch of Cornish sweetly scented Narcissi for Valentine’s Day.

My local supermarket had started to sell more traditional British flowers and I would look at the varieties on offer and think I could grow them. So I did. 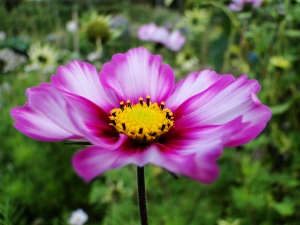 I’ve had flowers to cut for the house since the end of May and I still have some going strong. I’ve grown sweetpeas, nigella, cosmos, sunflowers, didiscus, dahlias, cornflowers, calendula and antirrhinums. All, apart from the dahlias were raised from seed.

I’ve recently read about the impact cut flower production has in parts of Africa and South America where flowers are grown to supply the European flower industry. These are often countries where fertile land for food production and water are in short supply, regulations on chemicals usage are not as strict as in the EU and growing large scale monocultures is affecting biodiversity and all of this to produce a luxury purchase – a bunch of flowers. The Ecologist has an interesting article entitled Green Living- Behind the Brand – Cut Flowers if you are interested in reading more.

There are an increasing number of British cut flower growers such as Wiggly Wigglers and The Real Cut Flower Company and more supermarkets are stocking British grown cut flowers but if you’ve got a patch of garden or an allotment why not grow some of your own. Not only will you have the pleasure of picking your own flowers but there won’t be any airmiles, hopefully no chemicals and insects will love them too. I will post at a later date the tips I’ve learnt this year and varieties I would recommend.

2 thoughts on “Cut Flowers – Why are British flowers the bees knees?”